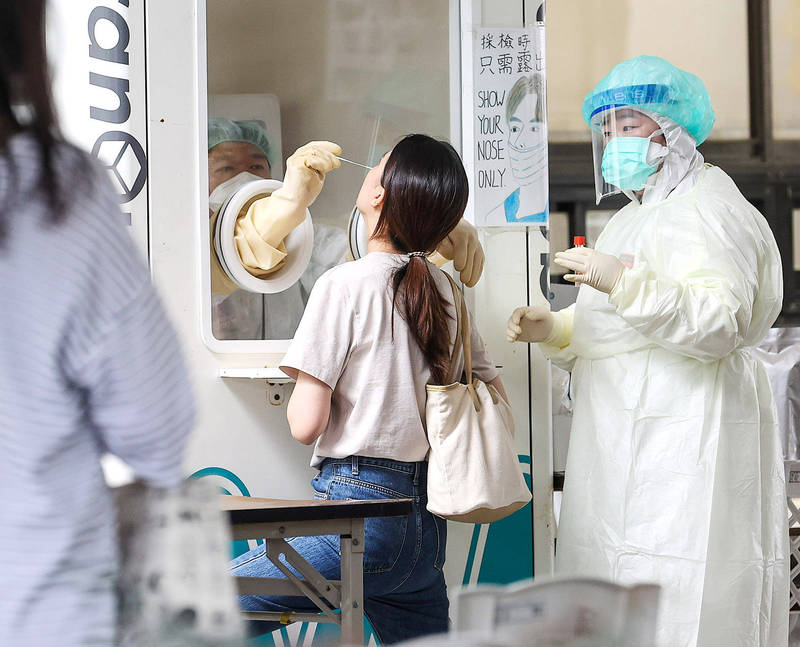 By Lu Yi-hsuan and Jake Chung / Staff reporter, with staff writer and CNA

The Central Epidemic Command Center （CECC） plans to require people attending events that pose a high risk of contagion to prove that they have received a COVID-19 booster shot.

The CECC unveiled the plan yesterday at a meeting at the Executive Yuan called by Premier Su Tseng-chang （蘇貞昌）.

The policy would also cover people whose jobs or circumstances require them to have close contact with others, given they are eligible to receive a vaccine, it said.

Noting that 99.6 percent of people who tested positive for COVID-19 this year were either asymptomatic or had only mild symptoms, Su told the meeting that the government is changing its pandemic strategy “to have no severe illness and to control the conditions of those with little to no symptoms.”

To achieve the goal of “zero severe COVID-19,” all government agencies should endeavor to increase the vaccine coverage rate among older people and other high-risk groups, he said.

In light of rising COVID-19 infections among students, Su instructed the Ministry of Education to clarify the standards for canceling classes.

It was the 11th consecutive day that the number of new local cases had exceeded 100 and the third straight day with a local case count above 400, indicating that domestic cases “are still at a high point,” Minister of Health and Welfare Chen Shih-chung （陳時中）, who heads the center, told the CECC’s daily news conference.

New Taipei City reported the highest number of new cases with 145, followed by Taipei with 100 and Keelung with 36, CECC data showed.

Of the 3,976 domestic cases confirmed from Jan. 1 to Sunday, 13 were classified as moderate infections and two as severe, while the rest were either mild or asymptomatic, Chen said.

The CECC yesterday reported one new case with moderate symptoms, a Taiwanese woman in her 30s who received a single dose of a COVID-19 vaccine.

She tested positive for COVID-19 on Wednesday, and had lower oxygen levels and shortness of breath. She is being treated at a hospital, Chen said.

The CECC yesterday reported 191 imported cases, of whom 117 tested positive upon arrival in Taiwan.

Chen said that a contributing factor to the high number of imported cases is a flight from Vietnam that arrived on Sunday, when 48 of the 204 passengers on board tested positive upon arrival.