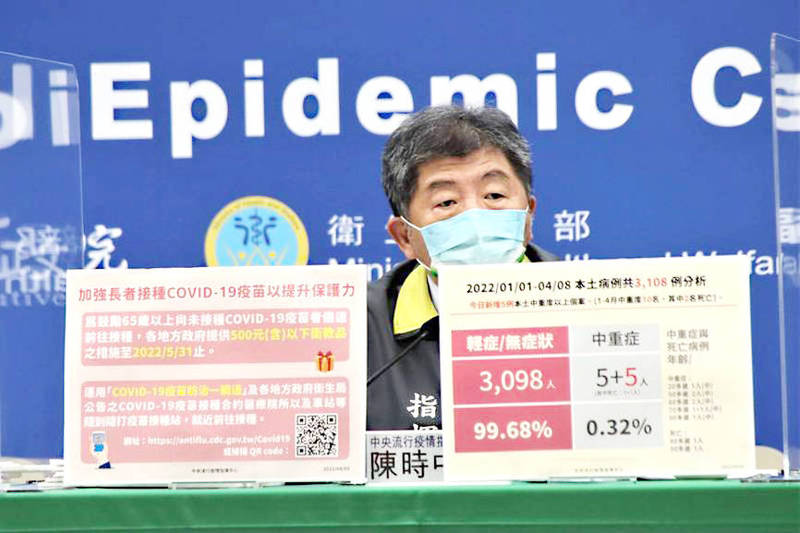 Minister of Health and Welfare Chen Shih-chung gives an update on the COVID-19 pandemic at a daily news conference in Taipei yesterday. Photo courtesy of CECC

The latest death was a woman in her 90s who was confirmed with COVID-19 on Monday. She was linked to a cluster infection in Keelung involving several police officers.

She died on Friday, the CECC said.

The woman had high blood pressure and Parkinson’s disease, and had not been vaccinated against COVID-19, Centers for Disease Control Deputy Director-General Philip Lo （羅一鈞）, deputy head of the CECC’s medical response division, told a news conference.

Her blood oxygen saturation level was below 94 percent, Lo said.

She also developed bacterial pneumonia and septic shock while being treated with remdesivir before passing away, he added.

Yesterday’s local case count of 442 was the highest single-day tally for this year. The CECC has reported more than 100 new domestic cases every day since Friday last week.

The six special municipalities continue to account for the majority of cases, Minister of Health and Welfare Chen Shih-chung （陳時中） told the news conference.

New Taipei City had the highest number of new cases with 143, followed by Taipei with 95, Taoyuan with 41, Kaohsiung with 38, Taichung with seven and Tainan with six, said Chen, who heads the CECC.

Other areas in Taiwan that recorded at least 10 cases include Keelung with 39 cases, Hualien County with 24, Pingtung County with 14 and Yilan County with 10, Chen said.

The CECC has reported 3,108 local cases this year so far.

The center also reported 136 new imported cases yesterday, 107 of whom tested positive upon arrival in Taiwan.

The CECC also expanded a rapid antigen test requirement for passengers arriving from Vietnam on all airlines, instead of only Vietnamese carriers, as it had announced on Thursday.

Starting yesterday, passengers from Vietnam must present a negative rapid antigen test for COVID-19 within six hours of boarding a flight to Taiwan, Chen said.

They must also present a negative polymerase chain reaction test result from within two days before the flight. The program is to run until May 6.

Therefore, the policy’s coverage has been expanded to reduce the impact of imported cases on Taiwan’s medical system amid a spike in domestic cases, he added.

The CECC has confirmed 26,836 cases since the COVID-19 pandemic began in early 2020, including 18,149 locally transmitted infections. It has reported 854 deaths from the disease.