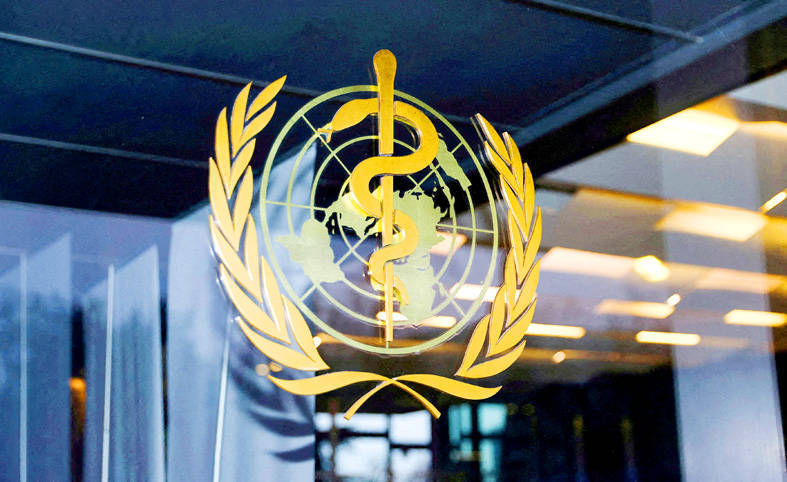 The World Health Organization logo is pictured at the entrance of its building in Geneva, Switzerland, on Dec. 20 last year. Photo: Reuters

WHO, CIVIL AVIATION: A meeting with the US stressed Taiwan’s role in global affairs and that Taipei could expand its influence, the foreign affairs ministry said

US and Taiwanese officials have held talks on expanding Taiwan’s participation in international bodies, including “opportunities” for the nation to attend a major WHO meeting next month.

Taiwan is excluded from most global organizations due to objections from China. In particular, Taipei has said that its exclusion from the WHO hampered efforts to fight the COVID-19 pandemic.

The US Department of State said in a statement on Friday that the meeting took place in Washington between high-level diplomats, including Representative to the US Hsiao Bi-khim （蕭美琴） and US Assistant Secretary of State for International Organization Affairs Michele Sison.

Taiwan attended the World Health Assembly, the WHO’s decisionmaking body, as an observer from 2009 to 2016, when relations between Taipei and Beijing were warmer.

The G7 has backed calls for Taiwan’s participation at the WHO.

China and the WHO have previously said that Taiwan was provided appropriate access to information about the COVID-19 pandemic.

Taiwan and the US also discussed Taiwan possibly contributing to other multilateral forums via membership or “meaningful participation,” the state department said.

“All participants recognized the importance of working closely with all those who share our concerns regarding attempts to exclude Taiwan from contributing its expertise, resources, energy and generosity to the international community,” it said.

The Ministry of Foreign Affairs yesterday expressed its gratitude, saying the high-level working group meeting was held in-person for the first time since the COVID-19 pandemic began in early 2020, and showed the US’ “rock-solid” friendship and support for Taiwan.

The meeting recognized Taiwan’s constructive role in multinational cooperation in the post-pandemic era, and showed that Washington would continue to assist Taipei to expand its international presence and push critical global agendas, the ministry said.

Taiwan would continue to work with like-minded countries such as the US to help maintain the international order and strengthen regional cooperation, it added.