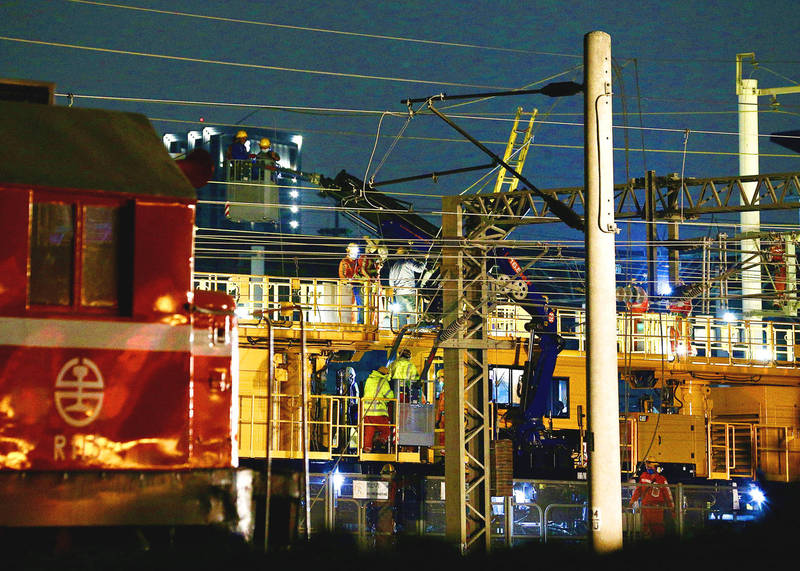 Workers try to restore power on Friday night after an outage shut down train services between Tainan and Kaohsiung’s Zuoying Station. Photo: CNA

TAIPOWER, CITIES IRATE: Four people were called in for questioning after an electricity tower was hit by a silo that fell the wrong way as it was being torn down in Kaohsiung

By Hsu Li-chuan and William Hetherington / Staff reporter, with staff writer and CNA

State-run utility Taiwan Power Co （Taipower, 台電） and the Tainan and Kaohsiung city governments have vowed to seek compensation for a power outage caused on Friday when a cement company’s demolition project went wrong and a transmission tower was knocked over.

The electricity tower operated by Taipower collapsed at 3:40pm when it was hit by a 52m-tall storage silo that fell the wrong way as it was being torn down at Southeast Cement Corp’s （東南水泥） Kaohsiung plant.

The TRA and THSRC resumed operations at 9pm and 10:40pm, respectively.

Taipower had said that more than 160 workers and more than 40 vehicles were dispatched to repair the transmission tower and 69 kilovolt power line before train services could resume.

The power utility yesterday said that it would seek damages from Southeast Cement for Friday’s incident.

Kaohsiung authorities are to fine the company NT$6.07 million （US$211,461） for failing to comply with safety, health and environmental protection regulations and standards related to demolition work.

Calling the incident a “major violation,” Kaohsiung Mayor Chen Chi-mai （陳其邁） yesterday said that the city government would require the company to suspend operations and hand the case over to the judiciary.

The city has conducted an inspection of the work site, he added.

The company and its contractor had been fined for an incident last year, when the operator of an excavator was crushed to death while digging a hole for an electric tower, Chen said, adding that Friday’s incident appeared to have occurred because a work plan was not adhered to.

To ease traffic congestion caused by the incident, Tainan set up an emergency response team to direct traffic near the affected stations and had 90 shuttle buses evacuate people from stranded trains, Tainan Mayor Huang Wei-che （黃偉哲） wrote on Facebook on Friday night.

Tainan would demand compensation from Southeast Cement to pay for expenses and administrative costs incurred in dealing with the aftermath of the accident, he said.

Southeast Cement yesterday said it “deeply regrets” the incident, that it would not evade responsibility and that it would await an assessment of the damage.

Prosecutors said they were pursuing charges of public endangerment against the four.

Law enforcement officers in Kaohsiung yesterday escort a Southeast Cement Corp employee and a crane operator, both surnamed Tseng, and two contractor employees, surnamed Wang and Lin, for questioning about a demolition incident that caused a power outage in southern Taiwan on Friday. Photo courtesy of a member of the public via CNA

People wait for services to resume at the Tainan high-speed rail station after the demolition of a cement factory brought down an electric tower in Kaohsiung, causing a power cut at 3:39pm on Friday. As a result, Taiwan High Speed Rail Corp suspended services between Tainan and Zuoying stations, with passengers being offered tour bus services between the stations from about 5pm, amid surging traffic ahead of the four-day Tomb Sweeping Day weekend. Photo: CNA