《TAIPEI TIMES》 US lawmakers call to include Taiwan in IPEF 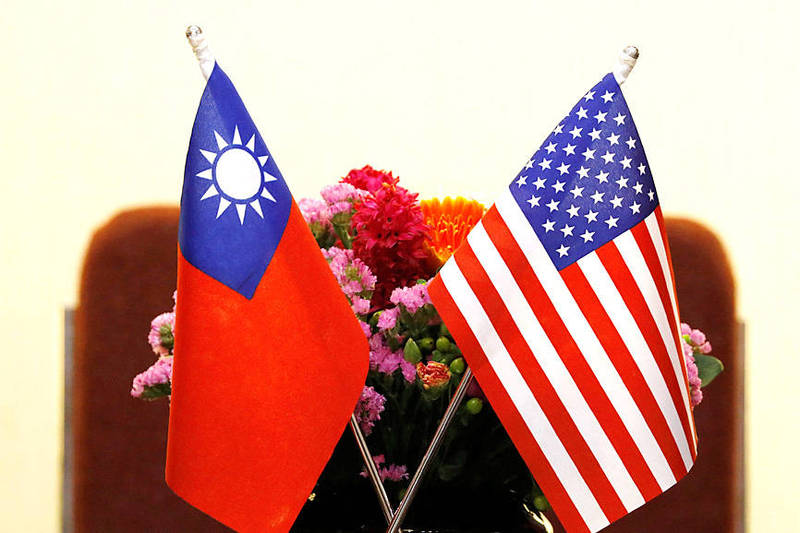 Taiwan and US flags are pictured on a table for a meeting between then-US representative Ed Royce and then-legislative speaker Su Jia-chyuan in Taipei on March 27, 2018. Photo: Tyrone Siu, Reuters

Two hundred US lawmakers in a letter on Wednesday called for Taiwan’s participation in the planned Indo-Pacific Economic Framework （IPEF）, touting the nation’s economic importance and the signal of support it would send to counter Chinese intimidation.

The letter, drafted by the four cochairs of the Congressional Taiwan Caucus and addressed to US Secretary of Commerce Gina Raimondo and US Trade Representative Katherine Tai （戴琪）, said that Taiwan should be “at the front of the line” to join the framework.

The move is considered to be Washington’s latest effort at countering growing Chinese influence in the region in the wake of its withdrawal from the Trans-Pacific Partnership in 2017.

Calling the reasons for including Taiwan “compelling,” the letter outlined the nation’s strengths as a major Indo-Pacific economy.

It not only served as the eighth-largest trading partner to the US last year with US$114 billion in total volume, but has also aided in diversifying the US supply chain away from overdependence on the People’s Republic of China （PRC）, the letter said.

It also highlighted economic engagement with Taiwan through the US-Taiwan Economic Prosperity Partnership Dialogue — which covers topics similar to those considered for the IPEF — and the Global Cooperation and Training Framework （GCTF）, which also includes Japan and Australia as full partners.

Other regional economies should also welcome Taiwan’s participation, considering its active membership in APEC since 1991, and facilitation of trade and investment liberalization, it said.

Taiwan’s expertise in inviting thousands of participants to the GCTF “would also enhance the likelihood of a successful outcome of the IPEF deliberations,” it added.

“For these reasons alone, we believe that Taiwan should be at the front of the line to be invited to participate in the IPEF,” it said. “Taiwan’s inclusion would also send a clear signal that the United States stands with its allies and partners, and will not be bullied by the PRC.”

“Mindful of Russia’s ongoing war on Ukraine, it is critically important for the United States to unequivocally support Taiwan as it confronts an increasingly bellicose PRC,” it said. “Taiwan’s admission to the IPEF would be an essential step in demonstrating America’s resolve to protect, defend and strengthen that key partnership.”

The Ministry of Foreign Affairs yesterday thanked the bipartisan group of lawmakers for their support.

Taiwan participates in regional economic affairs, and is committed to deepening economic ties with the US and other like-minded partners, ministry spokeswoman Joanne Ou （歐江安） said.