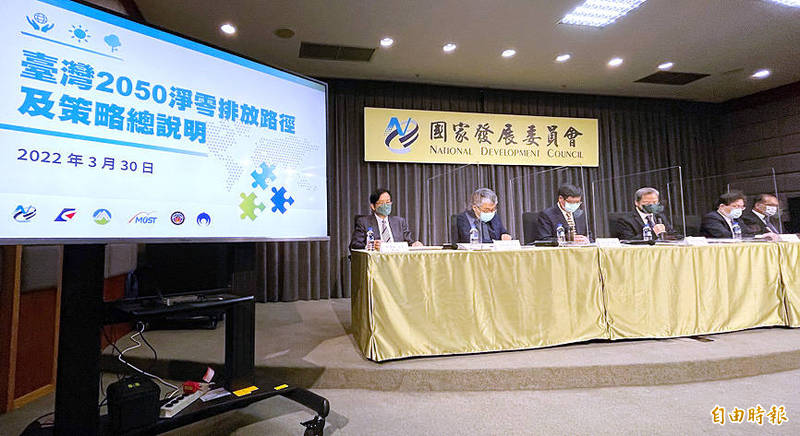 ‘NO BAN’: Minister Kung Ming-hsin said the council would not ban vehicles powered by fossil fuels, but would use subsidies to advance the adoption of electric vehicles

The National Development Council （NDC） yesterday unveiled a road map for Taiwan’s push to become “carbon neutral,” with sources of renewable energy to account for at least 60 percent of the nation’s energy mix, which would exclude nuclear power.

NDC Minister Kung Ming-hsin （龔明鑫） said there is no need to worry about electricity shortages or a lack of green energy during the transition.

The nation is capable of increasing electricity supply by 2 percent each year, sufficient for companies to expand their operations, Kung said.

He confirmed plans to impose a carbon tax to subsidize the development of green energy sources and purchases of electric vehicles, among other things.

However, the government would give companies time to gain better understanding of the initiative and make adjustments before introducing the carbon tax, Kung said, adding that it would set aside some green energy resources for small and medium-sized enterprises to purchase.

Heavy users of electricity, such as Taiwan Semiconductor Manufacturing Co （台積電）, have inked deals to buy green energy to be developed by local suppliers for the next 20 years, the council said.

The government would earmark NT$900 billion （US$31.49 billion） from this year to 2030 to pursue the policy goal, including NT$210.7 billion to be used to develop renewable and hydrogen energy sources, NT$207.8 billion to build smart grids and storage facilities, NT$128 billion to replace conservation equipment and NT$168.3 billion to promote electric vehicles, the council said.

State-run businesses would contribute NT$440 billion and the undertaking might induce an additional NT$4 trillion of private investment, it said.

“We aim to raise the ratio of electric transportation tools in the hope that electric buses will make up 100 percent of street buses by 2030,” Kung said, adding that he expects all private vehicles for sale in the local market to be electric by 2040.

The government has no intention to ban non-electric vehicles, but would use subsidies to promote electrification, he said.

It would start with government-owned vehicles and extend the practice to taxis and other areas, he said.

The government plans to review its road map every five years, as ever-changing technologies warrant a diversified approach, he said.

The council is to release more details this year on how it intends to cut carbon emissions by 2030, Kung said.