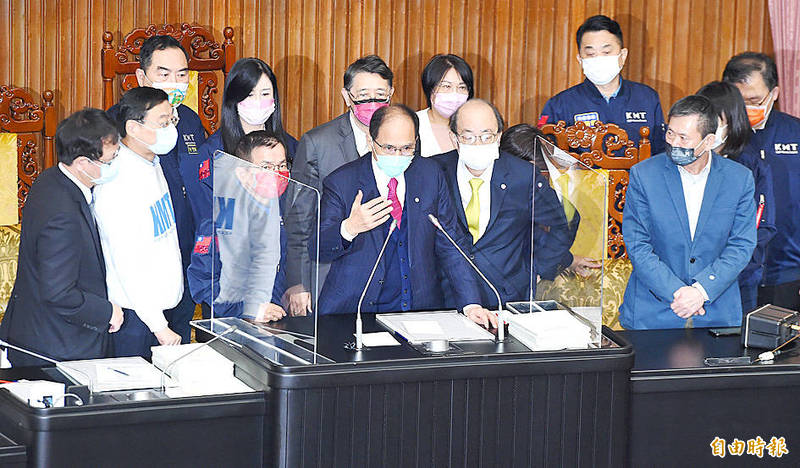 SEEING RED: After a DPP legislator said that ending a Japanese food import ban would be a great Lunar New Year’s gift, the KMT ground a budget review to a halt

The government has not set a timeline for removing restrictions on imports of food from Fukushima and four other Japanese prefectures that were implemented after the 2011 Fukushima Dai-ichi nuclear power plant disaster, Executive Yuan spokesman Lo Ping-cheng （羅秉成） said yesterday.

Lo made the remarks amid rumors that the government would announce an end to the ban after the legislature’s passage of this year’s central government budget later yesterday.

Earlier in the day, Democratic Progressive Party （DPP） Legislator Kuo Kuo-wen （郭國文） said that the government should give Taiwanese a Lunar New Year present by lifting the ban today, which prompted the Chinese Nationalist Party （KMT） caucus to occupy the speaker’s podium at the legislature and threaten to boycott the budget review.

The legislature reconvened in the afternoon and completed the review after DPP caucus whip Ker Chien-ming （柯建銘） apologized for Kuo, saying that the legislator’s remarks had caused a misunderstanding.

Lo said that an announcement would be made if there is any substantial progress on the ending the ban.

After a weekly Cabinet meeting on Thursday, Lo said that when it comes to food imports, public health is the government’s top priority, regardless of the source, but added that Taiwan’s policies should be in line with international standards and follow scientific evidence.

For 11 years, Taiwan has banned food imports from Fukushima Prefecture, where the disaster occurred, as well as the nearby prefectures of Ibaraki, Tochigi, Gunma and Chiba.

The KMT on Thursday said that it strongly opposed easing the import restrictions in the absence of what it called science-backed measures to guarantee the safety of products from the prefectures.

KMT Deputy Secretary-General Wang Yu-min （王育敏） told a news conference on Thursday that the DPP would be “trampling on public opinion” in lifting the ban, because Taiwanese voted to maintain it by a 78 percent to 22 percent margin in a national referendum in 2018.

KMT Legislator Tseng Ming-chung （曾銘宗） said that Taipei should have more leverage in its talks with Tokyo on the food import ban, given Taiwan’s annual trade deficit with Japan.

Taiwan imported US$45.88 billion of goods from Japan in 2020, while its export orders from Japan totaled US$23.4 billion, government data showed.

Japanese authorities have repeatedly expressed concerns over the ban.

In a bilateral meeting on Jan. 11, Japan-Taiwan Exchange Association Chairman Mitsuo Ohashi urged Taiwan to address the issue as soon as possible.

Premier Su Tseng-chang, second row center in orange mask, poses with legislators for a group photograph following the passage of the government’s budget at the Legislative Yuan in Taipei yesterday, the last day of an extraordinary legislative session. A new legisltive session is to commerce after the Lunar New Year holiday. Photo: CNA