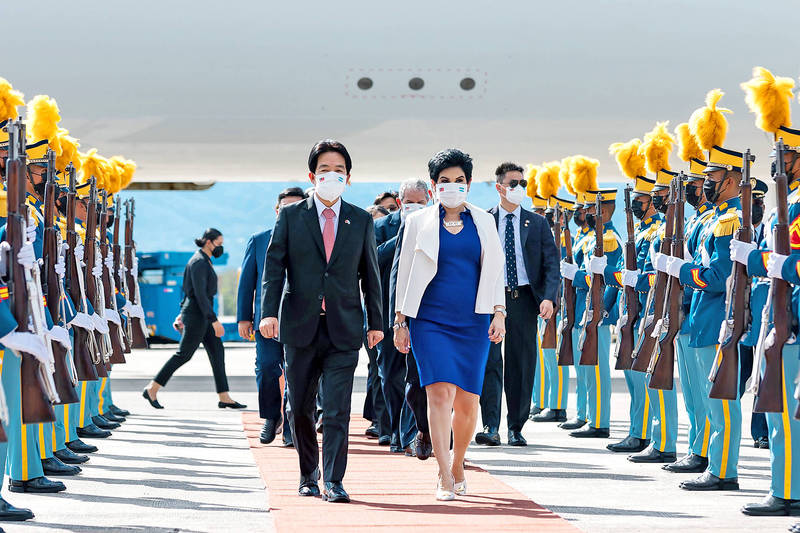 ‘HAND IN HAND’: William Lai is in Honduras to attend the inauguration of Xiomara Castro, who said that her country hopes to maintain its relationship with Taiwan

Honduras is grateful for the support Taiwan has provided and hopes to maintain their relationship, Honduran president-elect Xiomara Castro said on Wednesday after meeting Vice President William Lai （賴清德）, who is in the country to shore up shaky ties.

Honduras is one of 14 countries with formal diplomatic relations with Taipei.

Castro floated the idea of ditching Taipei for Beijing in her election campaign.

China has ramped up pressure to reduce Taiwan’s international footprint.

In comments to Taiwanese media after meeting Lai, who is in Honduras for the presidential inauguration yesterday, Castro thanked Taiwan.

“The people of Honduras are always grateful to the people of Taiwan for their support that they have always given us,” she said in a video clip carried by the Central News Agency （CNA）.

“We have worked together hand in hand for many years and hope to maintain this relationship,” she added.

Lai had been due to hold formal talks with Castro and deliver materials to combat the COVID-19 pandemic, but that was canceled, a CNA report said, adding that they met later for about seven minutes.

Lai told Castro that Taiwan would increase its cooperation with Honduras and promote their friendship, the report added.

Posting a picture of him meeting Castro on Twitter, Lai wrote in English: “Honoured to attend the transfer of power ceremony tomorrow, and help strengthen the friendship between our democratic countries.”

US Vice President Kamala Harris is also going to Castro’s inauguration, potentially giving Lai a chance to meet her, although US officials have indicated that there would be no formal meeting.

In the run-up to Honduras’ election in November last year, a visiting US delegation made it clear that Washington wanted the Central American country to maintain its relations with Taiwan.

The US has been worried about growing Chinese influence in its back yard.

Harris’ arrival is a boost for Castro in the dispute over control of Honduras’ congress and in addressing its weak economy, Netherlands Institute for Multiparty Democracy in Central America director Luis Leon said.

It means the US has an “opportunity to position its interests on issues such as migration and maintaining the country’s relations with its ally Taiwan,” Leon said.

Beijing has been stepping up efforts to win over Taiwan’s remaining diplomatic allies, re-establishing relations with Nicaragua last month, and has openly said that it is aiming to reduce the number to zero. 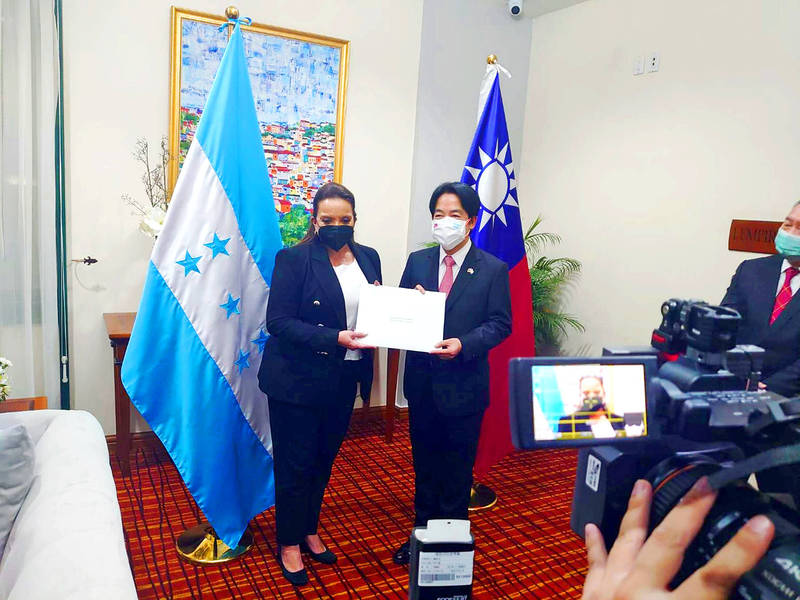 Vice President William Lai meets with Honduran president-elect Xiomara Castro on Wednesday during his visit to Honduras for her inauguration. Photo: CNA