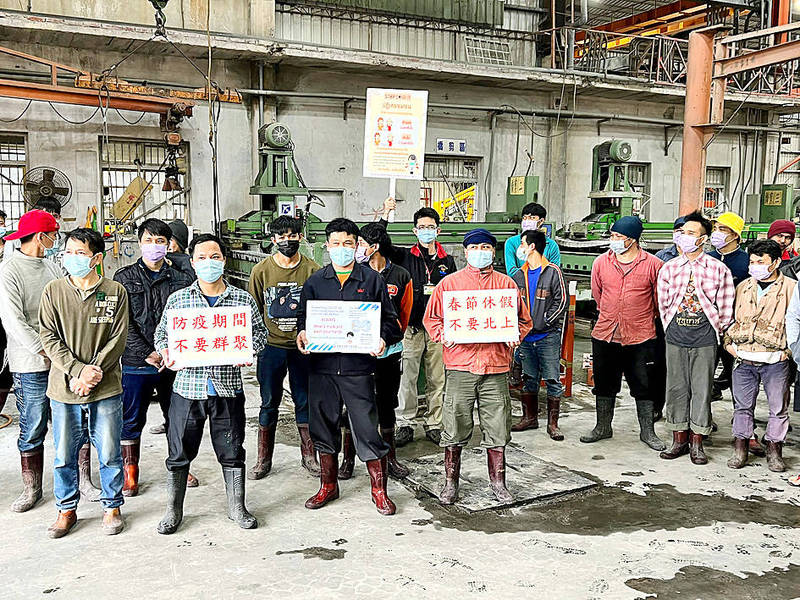 Migrant workers hold up a sign and placards urging people to follow disease prevention guidelines in an undated photograph at a factory in Hualien County. Photo courtesy of the Hualien County Government via CNA

The Control Yuan urged the Ministry of Labor to improve its monitoring of compensation for migrant workers after a report found that many who became disabled as a result of occupational accidents in Taiwan did not claim disability payments after going home.

The Control Yuan made the request after approving an investigative report written by two of its 27 members.

This is a national disgrace in terms of efforts to protect migrant workers, said Wang, who cowrote the report with Wang Yu-ling （王幼玲）.

Taiwan currently has about 700,000 migrant workers, after first opening its doors to foreign workers more than 30 years ago. From 2015 to 2018, the rate of migrant worker disability caused by occupational accidents in the manufacturing sector was double that of local workers, Wang Yu-ling said.

An investigation found that from 2016 to 2020, 1,087 migrant workers with employment permits received disability compensation, with 512 having terminated their employment contracts, she said.

More than 50 percent of migrant workers who were eligible to claim disability pensions and had returned to their home countries stopped receiving pension payments, the report said.

This was due to difficulties in claiming their disability living allowance because of complicated application procedures stipulated in the Labor Insurance Disability Benefit Payment Standards and the Act for Protecting Workers from Occupational Accidents （職災勞工保護法）, the report said.

The report also revealed a range of problems faced by migrant workers in claiming disability and other forms of compensation after an occupational accident.

During one of their on-site visits, managers at a factory said without hesitation that migrant workers were usually assigned to the more dangerous jobs, Wang Mei-yu said.

The investigation also discovered that some unscrupulous employers did not enroll their legally employed migrant workers in the labor insurance program, while others immediately filed applications to withdraw their migrant workers from the program after they were disabled or injured at work, Wang Mei-yu said.

In addition, most of those who were disabled or injured in occupational accidents were replaced by newcomers, she said.

Moreover, the employers did not help them with vocational rehabilitation, which is in contravention of the Labor Standards Act （勞動基準法）, she said.