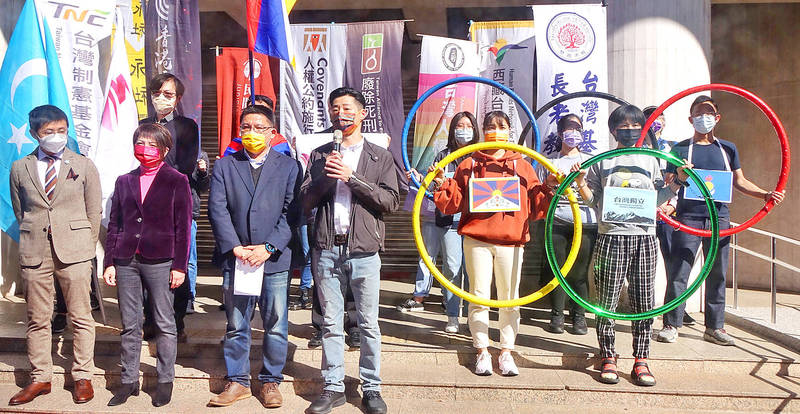 Members of civil society groups hold up the Olympic rings at a news conference outside the Legislative Yuan yesterday, calling for a diplomatic boycott of the Beijing Winter Olympics. Photo: Liu Hsin-de, Taipei Times

The Chinese Taipei Olympics Committee （CTOC） should ensure that the freedom of speech of Taiwanese athletes is protected when they compete at the Winter Olympic and Paralympic Games in Beijing this year, Amnesty International Taiwan yesterday told a news conference outside the Sports Administration building in Taipei.

The Winter Olympics are to take place from Friday next week to Feb. 20, while the Winter Paralympic Games are to be held from March 4 to 13.

Four Taiwanese athletes are to compete in the Winter Olympics: Huang Yu-ting （黃郁婷） in the 500m, 1,000m and 1,500m speed skating; Lin Sin-rong （林欣蓉） in the luge women’s single; and Ho Ping-jui （何秉睿） in the men’s and Lee Wen-yi （李玟儀） in the women’s slalom.

At the end of last month, Amnesty International launched a global initiative to support six people — Taiwanese campaigner Lee Ming-che （李明哲） and five Chinese dissidents — who have been imprisoned, detained or gone missing for exercising their freedom of speech in China, it said.

Although the Chinese government had promised to improve its human rights record when it held the 2008 Beijing Olympics and Paralympics, conditions in the country are worse than in 2008, the organization said.

In the petition, the group urged the CTOC to protect the freedom of speech of Taiwanese athletes while competing at the Games.

Athletes must also be informed about China’s human rights record, it said.

All athletes in the Winter Olympics and Paralympic Games should be protected by the International Bill of Human Rights and Olympic Charter, it added.

Separately, 31 civic groups and 15 politicians yesterday urged the government to organize a diplomatic boycott of the Winter and Paralympic Games in Beijing because of its human rights violations.

Democratic Progressive Party Legislator Fan Yun （范雲） told a news conference outside the Legislative Yuan in Taipei that Chinese tennis player Peng Shuai （彭帥） was silenced and her movements restricted after telling the public that she was sexually assaulted by a high-ranking Chinese official.

“The purpose of the Olympic Games is to maintain peace and uphold human dignity, and a regime that has been violating human rights is not qualified to host the Olympics,” she said.

Taiwan has no reason to endorse the Winter Olympics, as Beijing has been persecuting activists in China and last year sent more than 900 military jets to encroach on Taiwan’s airspace, New Power Party Legislator Chiu Hsien-chih （邱顯智） said.

The Sports Administrations said in a statement that the CTOC is in charge of organizing the delegation for the Winter Olympics and taking care of athletes while they are competing in Beijing.

No government official is to form part of Taiwan’s Olympic delegation, it said.

“We are still evaluating if Taiwan’s delegation should participate in the opening and closing ceremonies of the Winter Olympics and will make further announcements,” it said, adding that it would take into account Beijing’s disease prevention measures and other factors.