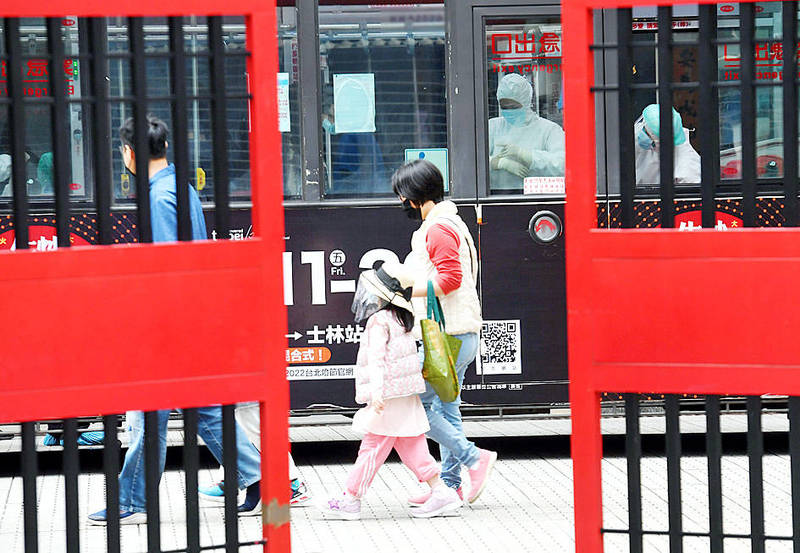 They also include 15 cases in Taoyuan that are mostly linked to previous infections, and two new cases at Far Eastern Memorial Hospital in New Taipei City’s Banciao District （板橋）, he said, adding that a total of 29 cases were confirmed in Taoyuan.

A second round of tests was conducted at Farglory Free Trade Zone — where more than 100 cases have been reported — with 14 people testing positive, including nine who were already in isolation, he said.

As workers in other areas of the free-trade zone all tested negative on Monday, but several new cases were still detected in a second round of tests on Tuesday among workers in two buildings where employees who had COVID-19 work, Askey Computer Corp’s （亞旭） factory is to remain closed, he said.

Other companies in the two buildings may gradually resume operations under the supervision of the CECC’s on-site command center, he added.

A case linked to a Taipei family cluster is a customer who ate at the same restaurant at about the same time as an infected friend of the family, he added.

The two new cases at Far Eastern Memorial Hospital are a hospitalized patient and her son, but they did not have any contact with a nurse who had earlier tested positive, so their source of infection is unclear, Chen said.

Asked if dining-in would be banned, as several of the new cases were not close contacts of previous cases, but had only dined at the same restaurant at about the same time, Chen said cluster infections could also occur at workplaces, not only at restaurants.

The Omicron variant is highly transmissible, so closing all venues where people might gather might no longer be practical, as it would affect many livelihoods, he said.

Dining-in would not be banned, but high-risk venues where cluster infections have been reported would be asked to temporarily suspend operations to identify contacts for testing and isolation, he added.

Scooter riders and a truck prepare to cross a road at the Port of Kaohsiung yesterday. Photo: CNA

《TAIPEI TIMES》 Quarantine to be shorter for…