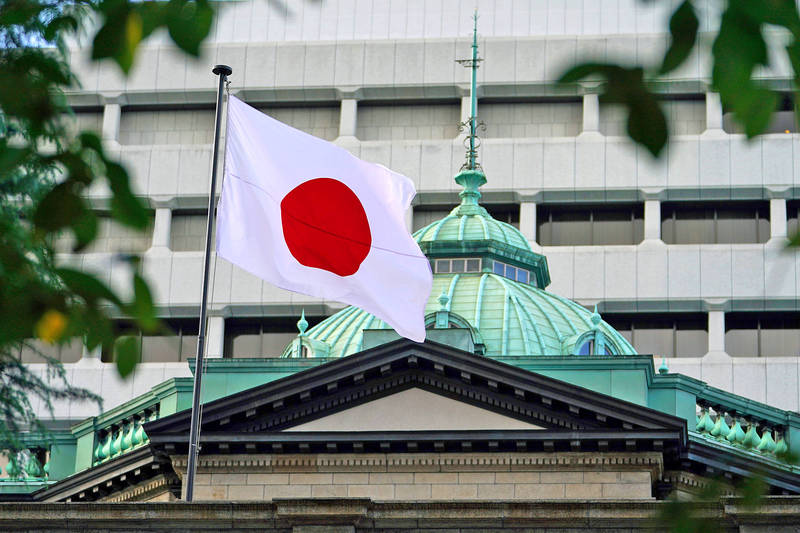 A Japanese national flag flies outside the Bank of Japan headquarters in Tokyo on Sept. 27 last year. Photo: Bloomberg

INCREASED COOPERATION: Part of the funding is to be used to further the aims of a Taiwan-US human resources development platform launched in 2015, a source said

An increase of ￥100 million （US$878,765） to Japan’s annual foreign affairs budget is for “advancing the Japan-Taiwan relationship,” information published on the Japanese Ministry of Foreign Affairs’ Web site showed.

The ministry’s budget for last year was ￥1.7 billion; it was increased to ￥1.8 billion for this year.

The ministry wrote that the additional funding was to be used for “cooperating with allies and like-minded countries to safeguard the universal values of the international community.”

Regarding Taiwan specifically, the ministry said that it was “responding to an increasingly complex security and economic environment,” and that it aimed to “strengthen diplomacy and cooperation with neighboring countries and regions.”

The last time Taiwan was specifically named in a Japanese budget report was in 2012, following the Fukushima Dai-ichi nuclear power plant disaster that had occurred a year earlier, a source said yesterday.

“That year, Taiwan was mentioned due to the assistance it provided Japan following the disaster, whereas this year it is due to the greater general emphasis Japan is putting on its relationship with Taiwan,” said the source, who asked to remain anonymous.

Since Japan and Taiwan lack formal diplomatic ties, the additional funding would be handled by the Japan-Taiwan Exchange Association, the source said.

However, the association is about the size of Japan’s medium-sized embassies, such as those in Canada and Malaysia, the source said.

Part of the increased funding this year would be used to further the aims of the Global Cooperation and Training Framework （GCTF）, the source said.

The GCTF is a “platform for the development of human resources” launched by the US and Taiwan in 2015, the association’s Web site says.

Through the framework, the Japanese Ministry of Foreign Affairs and the American Institute in Taiwan （AIT） host workshops on areas of common interest in the region, such as public health and environmental issues, inviting government officials and experts from different countries to attend them, it says.

As for China, Japan is to spend an additional ￥60 million this year on an event to mark the 50th anniversary of the normalization of Sino-Japan relations, the source said.

The move has been seen as sign of the growing importance to Japan of its relationship with Taiwan, the source said, adding that other signs include COVID-19 vaccine donations.

“The Japan-Taiwan Exchange Association has over the past few days been posting letters of gratitude from frontline medical workers on its Web site,” the source said.

Letters have been received from Japan’s Kanagawa, Chiba, Ibaraki, Nagasaki, Saka, Shiga, Fukui and Kyoto prefectures, and have described Taiwan and Japan as having a “strong friendship” that would manifest in “other forms of cooperation long after the pandemic is over,” they said.