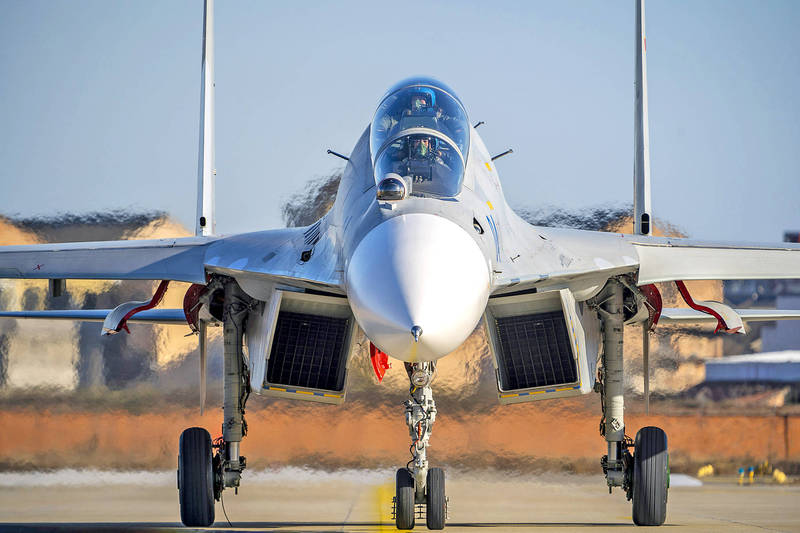 Chinese pilots prepare to fly a J-16 fighter jet at a training base in Ningbo, China, on Jan. 14. Photo: AP

SHOW OF FORCE: Incursions of 39 Chinese warplanes on Sunday and 13 yesterday were likely in response to US-Japan exercises off Okinawa, military analysts said

/ Staff writer, with AFP and CNA

The ministry late on Sunday said that the air force scrambled aircraft to broadcast warnings and deployed air-defense missile systems.

Yesterday’s incursion included eight J-16s and two J-16Ds — a jet introduced at an air show last year that is capable of neutralizing radar and communication systems, the ministry said.

On Oct. 4 last year, 56 aircraft entered the zone, the largest single-day incursion since the military began releasing such data in September 2020.

Last year, the ministry recorded 969 incursions by Chinese warplanes into Taiwan’s ADIZ, a database compiled by Agence France-Presse showed — more than double the number from 2020.

Yesterday, defense expert Lin Ying-yu （林穎佑） said that Beijing was trying to show its military might to world powers Japan and the US, which over the weekend concluded a round of drills off Okinawa.

Chieh Chung （揭仲）, an associate research fellow at the National Policy Foundation in Taipei, agreed, saying that the incursions did not pose a serious threat to Taiwan’s security, but were intended to show Tokyo and Washington that Beijing would not back down from a show of force.

The incursions were also far away from Okinawa to ensure that China gets its message across without sparking a conflict, he said.

The Japan Maritime Self-Defense Force conducted joint exercises with the US Navy south of Okinawa from Monday last week to Saturday, NHK reported.

Minister of Foreign Affairs Joseph Wu （吳釗燮） said in an interview with the Australian Strategic Policy Institute’s podcast The Bigger Picture that the international community should be vigilant of China as it seeks to expand its global influence.

China’s ambition apparently does not stop at Taiwan, Wu added, citing as an example the presence of Chinese surveillance ships near US-Australian military exercises in July last year.