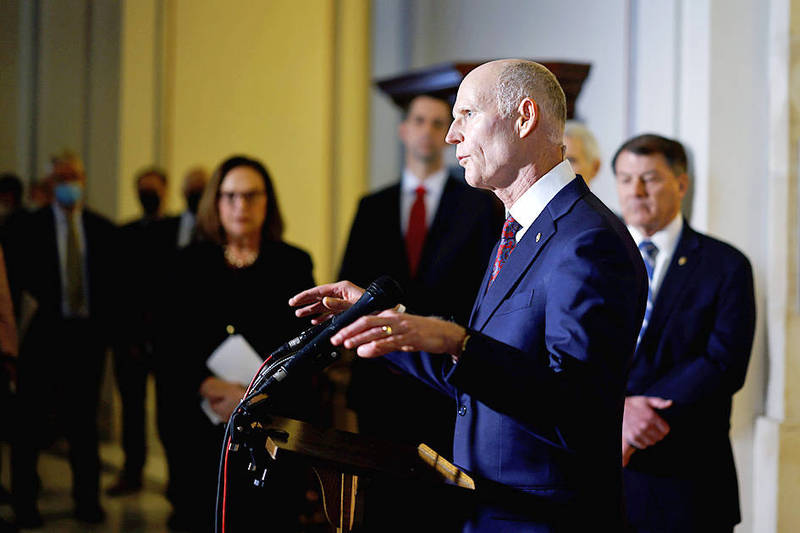 US Senator Rick Scott speaks at a news conference in Washington on Wednesday. Photo: Bloomberg

An army of Western social media influencers, each with hundreds of thousands of followers on TikTok, Instagram or Twitch, is set to spread positive stories about China throughout next month’s Winter Olympic Games.

Concerned about the international backlash against the Beijing Games amid a wave of diplomatic boycotts, Beijing has hired Western public relations professionals to spread an alternative narrative through social media.

In November last year, as US President Joe Biden contemplated a diplomatic boycott, Vipinder Jaswal, a US-based Newsweek contributor and former Fox News and HSBC executive, signed a US$300,000 contract with China’s consulate general in New York to “strategize and execute” an influencer campaign promoting the Beijing Winter Olympics and Paralympics in the US.

The contract, which has been registered with the US Department of Justice, lays out a detailed public relations strategy.

According to the agreement, between Nov. 22 last year and March 13, when the Winter Paralympics end, each influencer is asked to produce three to five “deliverables,” meaning content that is crafted to fit the target audience.

Jaswal said that his company has received up to 50 pitches from influencers, ranging from former Olympians to entrepreneurs.

The contract states that 70 percent of the content is to be culture-related, including Beijing’s history, cultural relics, modern life and new trends. Another 20 percent is to highlight “cooperation and any good things in China-US relations,” including high-level bilateral exchanges and positive outcomes.

Jaswal, who was born in the UK, received US$210,000 shortly after the contract was sealed with Chinese diplomats, he told the Observer.

He promised Beijing that his influencers would bring an estimated 3 million impressions on social media platforms frequently used by young Americans.

He said that he was well aware of the controversies that surround China’s policies in Xinjiang and Hong Kong, but “what we are trying to do is to simply highlight the integrity and dignity of the Olympics.”

Jaswal’s Beijing contract comes at a time of precarious bilateral relations between China and the US.

He is under heavy scrutiny since his contract with the Chinese consulate came to light.

On Jan. 3, US Senator Rick Scott urged in a letter to Newsweek’s top brass to “reconsider its relationship with Vipp Jaswal.”

Last month, Biden announced that his administration would stage a diplomatic boycott of the Winter Olympics, in a show of disagreement with the Chinese government’s treatment of Uighurs and other minority Muslims in Xinjiang.

Several US allies, including the UK and Australia, have since joined calls not to send government officials to China.

For more than a decade, China has been ramping up its overseas messaging through state-sponsored media outlets.

It spent nearly US$60 million in the US in 2020, said Open Secrets, an organization based in Washington that tracks money in US politics.

The funding included money for China Central Television’s US branch and the China Daily newspaper.