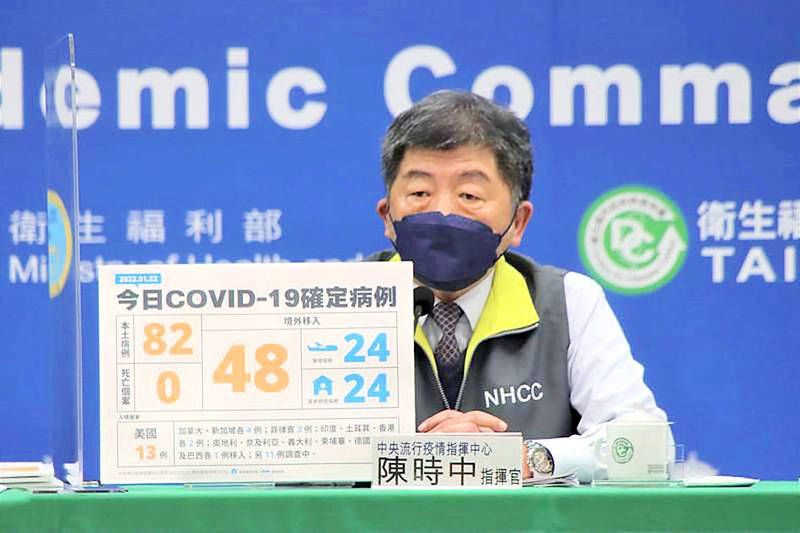 Minister of Health and Welfare Chen Shih-chung displays a chart showing yesterday’s COVID-19 case numbers at a news conference at the Central Epidemic Command Center （CECC） in Taipei. Photo courtesy of the CECC

‘DANGEROUS’: A cluster at a factory in Taoyuan can be traced to two workers who were infected at a steakhouse where they did not scan the QR code, the center said

Most of the 82 cases are linked to two clusters: 14 to one that was traced to a worker at Kaohsiung Harbor, and 64 to a factory of Askey Computer Corp （亞旭） in Taoyuan’s Farglory Free Trade Zone （遠雄自由貿易港區）, said Minister of Health and Welfare Chen Shih-chung （陳時中）, who heads the center.

Regarding the Kaohsiung cluster, Chen said that the 14 new cases are 10 workers at the harbor, two of their family members, and a mother and son who had visited a port on Cijin Island （旗津）.

Those numbers make contact tracing relatively difficult, he said, adding that about 3,000 people were tested on Friday.

Community testing stations have also been set up near the site to encourage people who might have had contact with an infected person or experience symptoms typical of COVID-19 to get tested, Chen said.

The cluster had thus far expanded to 27 cases, while the source of one of yesterday’s cases — a Kaohsiung woman in her 40s — was under investigation, CECC data showed.

Regarding the electronics company in Taoyuan, Chen said that the cluster can be traced to two migrant workers at the firm, who had a meal at a Tasty Steak （西堤牛排） restaurant in Taoyuan’s Jhongli District （中壢） on Jan. 9, during the shift of a waiter who was previously reported to have COVID-19.

The two workers, who were only on Friday confirmed to have the virus, did not scan the restaurant’s contact registration QR code when they entered, so they were not immediately identified for testing when dozens of cases associated with the restaurant were reported in the past two weeks, the center said.

The two where among the 1,005 workers at the company who were tested on Friday, Chen said, adding that on that day, six were confirmed to have the virus.

Sixty-four more among those tested were yesterday confirmed to have COVID-19, Chen said.

Among the 70 cases, six are Taiwanese employees, while the others are migrant workers, he said.

Fifty-six of the cases had been sent to an enhanced quarantine facility in Taipei’s Jiantan （劍潭） area, Chen said, thanking the Taipei City Government for facilitating their quarantines.

Employees at Askey share some facilities, including public spaces and cafeterias, with those at the 30 other companies in the trade zone, Chen said, adding that expanded testing of more than 2,000 workers in the two buildings was conducted yesterday.

While testing stations have been set up in the area, the center also asked the Ministry of Labor to assist in contact tracing and investigating whether there are companies that employ many migrant workers nearby.

“We consider the cluster to be quite dangerous, so we must remain vigilant,” Chen said, adding that the two clusters pose the highest infection risk to the local community.

When the QR code system was launched last year, more than 560 million contact tracing text messages were sent each month, but as of October, the number had dropped to about 490 million messages, and further dwindled to 290 million last month and 190 million so far this month, showing that people have let their guard down, Chen said.

However, the case of the migrant workers who did not scan the QR code, leading to a new cluster, should serve as a lesson, he said, urging everyone to cooperate with the system.

Restaurants should also thoroughly implement QR code registration, Chen said, adding that those that fail to cooperate would be ordered to suspend dine-in services.

Separately, the New Taipei City Government fined Askey NT$300,000, as it had from Jan. 6 to Sunday last week transferred 68 employees from its factory in the city’s Jhonghe District （中和） to Taoyuan.