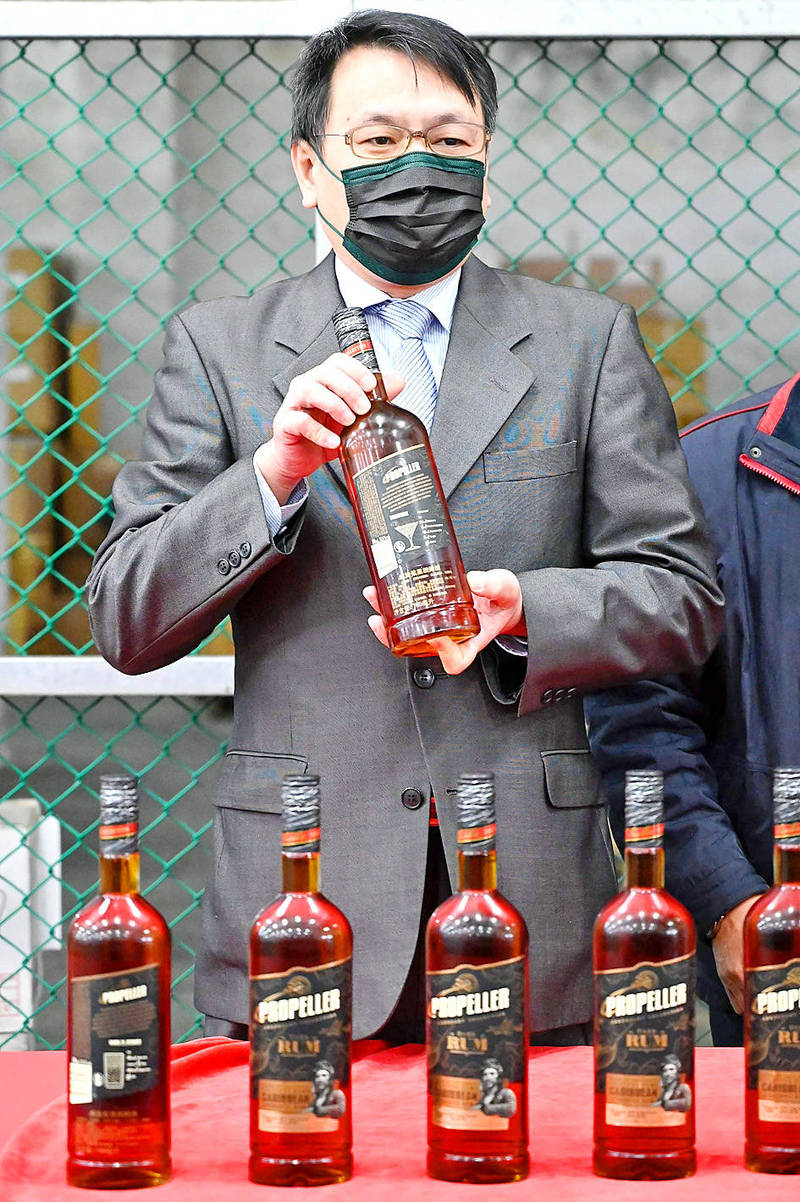 HELPING OUT: Lithuanian rum might have been affected by China’s customs ban, so Taiwan’s state-run liquor firm has directed a batch of 6,000 bottles to the local market

Lithuania is setting up a 130 million euro （US$147.52 million） loan fund for businesses affected by Chinese actions as the country faces economic pressure from Beijing after allowing Taiwan to open a de facto embassy in Vilnius.

China has pressed companies to sever ties with Lithuania or face exclusion from its market, a move that has dragged companies into a political dispute and placed Beijing on a collision course with the EU.

European Commissioner for Competition Margrethe Vestager promised Lithuania that state support for the businesses would be reviewed as soon as possible, the Lithuanian Ministry of Economy and Innovation said in a statement on Friday.

In addition to the fund, which can loan companies up to 10 million euros each, Lithuania wants to allow affected businesses to access an upcoming 200 million euro loan fund that is being set up to fight the effects of the COVID-19 pandemic.

“China’s actions affect the entire EU single market, so a strong and coordinated European policy response is needed to discourage such actions,” Lithuanian Minister of the Economy and Innovation Ausrine Armonaite said in the statement.

State-run Taiwan Tobacco and Liquor Corp （TTL, 台灣菸酒公司） said yesterday that a batch of 6,000 bottles of dark rum from Lithuania is expected to go on sale in Taiwan on Feb. 1, the first day of the Year of the Tiger on the lunar calendar.

The batch is part of a shipment of 20,400 bottles that arrived on Tuesday after TTL purchased the rum to prevent the shipment from potentially being blocked by Chinese customs.

TTL chairman Ting Yen-che （丁彥哲） told a news conference in Taipei that the bottles would be priced at NT$600 each and available for purchase at the company’s showrooms and some TTL-authorized sellers.

Taiwan and Lithuania have forged a strong friendship amid the COVID-19 pandemic with the nations donating masks and vaccines to each other, Ting said, adding that the rum purchase was the latest effort to enhance bilateral ties.

TTL said it was on Dec. 18 last year notified by the Ministry of Finance and Representative to Lithuania Eric Huang （黃鈞耀） that a shipment of rum from Lithuania bottled by MV Group Production scheduled to arrive in China on Dec. 29 could face hurdles with customs.

TTL purchased the rum to show support for Lithuania amid Beijing’s pressure campaign, it said.

“TTL will consider the possibility of further cooperation with Lithuania,” Ting said, adding that it exchanged product catalogs with MV Group to review possible imports to each other’s market.

After the announcement of the purchase, TTL received many inquiries for the rum, while the Presidential Office, the Ministry of Foreign Affairs, other government agencies and private businesses, such as the Grand Hotel Taipei, have also shown interest, Ting said.

Lithuanian beer brewer Volfas Engelman received a notice in October about a cancelation of orders from China, it said earlier this month.

The oldest beer brewer in Lithuania entered the Taiwanese market in 2020, but is now exploring opportunities to expand in the wake of an implicit Chinese ban on products from the Baltic state.