《TAIPEI TIMES》 Biden, Kishida pledge to ‘push back’ against China 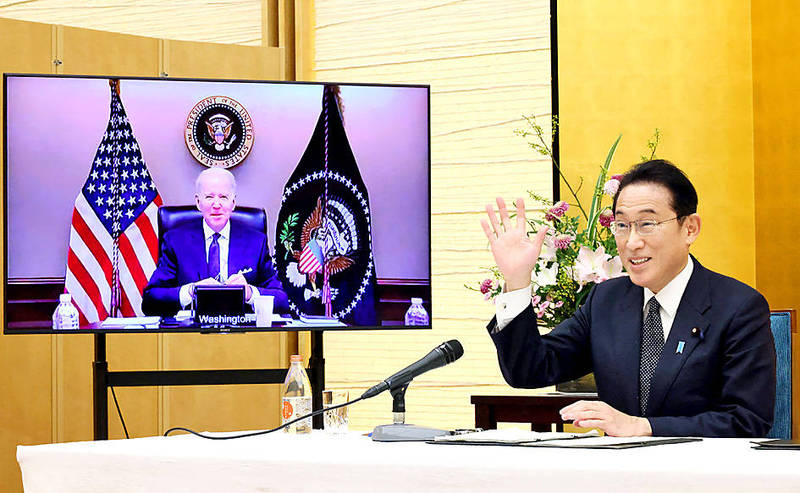 US President Joe Biden and Japanese Prime Minister Fumio Kishida agreed to “push back” against China and condemned North Korea’s spate of missile tests, while Biden underlined US commitment to defending Japan, in virtual talks on Friday.

In a video meeting that lasted about one hour and 20 minutes, Biden also agreed to travel to Japan in late spring for an official visit and summit of the Quadrilateral Security Dialogue, also known as the “Quad,” which groups Australia, India, Japan and the US, a senior US official said.

Biden has made restoring the importance of the US-Japanese relationship a priority since taking office one year ago, as opposed to his predecessor, Donald Trump, who questioned the benefit of longstanding US alliances in Asia and Europe.

After the meeting, which took place by videoconference behind closed doors, Biden wrote on Twitter that it was “an honor to meet with Prime Minister Kishida to further strengthen the US-Japan Alliance — the cornerstone of peace and security in the Indo-Pacific and around the world.”

Much of the discussion was on the growing strategic challenge from China, which has spooked the region with saber-rattling near Taiwan and announcements that it would “retake” the nation by force one day, if necessary.

The US official said that Biden and Kishida expressed concern over China “intimidating” its neighbors.

“The two leaders resolved to push back against the People’s Republic of China’s attempts to change the status quo in the East China Sea and South China Sea,” and also “underscored the importance of peace and stability across the Taiwan Strait,” the official White House post-meeting readout said.

Biden and Kishida expressed “concern” about Chinese “practices” in Xinjiang — where the US says China is committing genocide against Uighurs — and in Hong Kong, the readout said..

Regarding Japan’s dispute with China over the uninhabited, but strategically located Diaoyutai Islands （釣魚台） — known as the Senkaku Islands in Japan, but also claimed by Taiwan — Biden “affirmed the United States’ unwavering commitment to the defense of Japan, using its full range of capabilities,” it said.