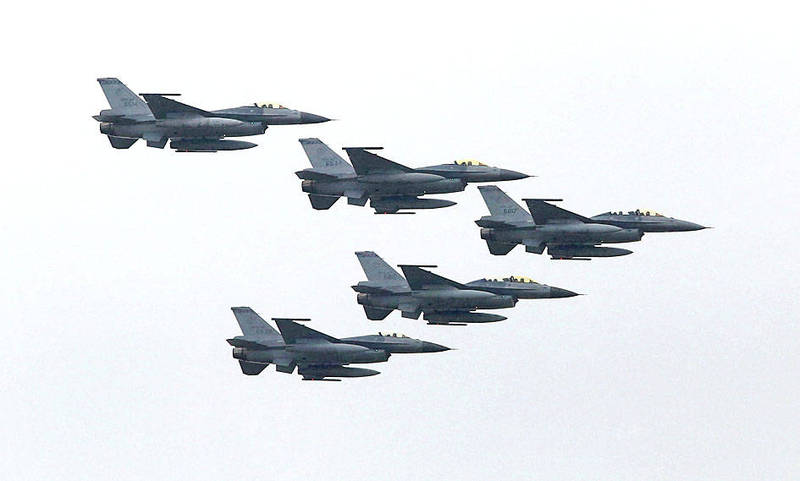 ORDER OF 66 JETS: Delivering the F-16s faster and enabling Taiwan to develop its fleet into one of the biggest in Asia would be based on ‘risk assessment,’ one official said

The US is looking for ways to accelerate delivery of Taiwan’s next generation of newly built F-16 jets, US officials said, bolstering the Taiwanese air force’s ability to respond to what Taipei and Washington see as increasing intimidation by the Chinese military.

The officials, speaking on condition of anonymity, said that they have not yet come up with a solution on how to speed up delivery of Block 70 F-16s, manufactured by Lockheed Martin Corp and equipped with new capabilities.

The aircraft are slated to be delivered by the end of 2026.

“It’s all about risk assessment ... and it’s clear where the risks are,” the Taiwanese official said, referring to tensions across the Taiwan Strait.

The F-16 is considered a highly maneuverable aircraft proven in air-to-air combat and air-to-surface attack.

Taiwan is on track to field one of the largest F-16 fleets in Asia once it takes delivery of 66 newly built F-16C/D Block 70 aircraft under an US$8 billion deal approved in 2019.

Any move to accelerate deliveries of new aircraft could ultimately come down to a determination by Biden’s administration that Taiwan’s defense needs are more urgent than those of other US allies and partners, experts say.

“That’s a Biden administration decision,” said Rupert Hammond-Chambers, the president of the US-Taiwan Business Council, an organization that encourages trade and business ties between the countries. “They would have to decide that the threat from China was more important than the threat from Iran or the threat from the Russians.”

The Block 70 aircraft are the newest F-16 configuration, with new avionics, a modernized cockpit and an improved engine, Lockheed Martin said.

A move to accelerate the aircraft delivery would be seen in Beijing in part through a political lens, former US deputy assistant secretary of defense for East Asia Abraham Denmark said.

“It is yet another clear signal of US determination to support Taiwan’s ability to defend itself,” said Denmark, who is an analyst at the Washington-based Wilson Center think tank.

Despite lacking formal diplomatic ties with Taiwan, the US is its main international backer and arms supplier.

Lockheed Martin declined to comment on any potential future requests to change the production schedule, referring queries to the Ministry of National Defense and the US government.

The US Department of State, which oversees foreign military sales, declined to comment on any internal discussions about potential changes to the delivery timeline.

Lockheed Martin’s new F-16 production line in Greenville, South Carolina, has several customers in the production queue ahead of Taiwan, including Bahrain, Slovakia and Bulgaria.

The US government has not asked Lockheed Martin for delivery timeline changes for the Taiwanese F-16 jets, a person familiar with the situation said.

The source declined to speculate about how much sooner Taiwan could get new-build F-16s even if a decision were made to accelerate deliveries. Any such effort would be complicated by production constraints, which include long lead times to source materials for Taiwan’s specific configuration of fighter aircraft.

Taiwan’s air force did not respond to questions on potential accelerated deliveries, but said in a statement that the military’s major weapon purchases are “rigorously planned in accordance with actual combat needs and planning schedules.”

The US sale of F-16s was guided by US law and “based on an assessment of Taiwan’s defense needs and the threat posed by [China], as has been the case for more than 40 years,” a Pentagon spokesperson said in a statement.

The missions to intercept Chinese aircraft are putting stress on Taiwan’s air force, which last year had several mishaps, including three fatal crashes.

Fuel costs, pilot fatigue and wear and tear on aircraft threaten the readiness of the air force if this pressure continues, Taiwanese and US military analysts said.

The air force last week suspended combat training for its entire F-16 fleet after a recently upgraded model of the jet crashed into the sea in the latest of a series of accidents.

“They [the Chinese] are wearing out their opponent without firing a shot,” said Derek Grossman, a senior defense analyst at the RAND Corporation.