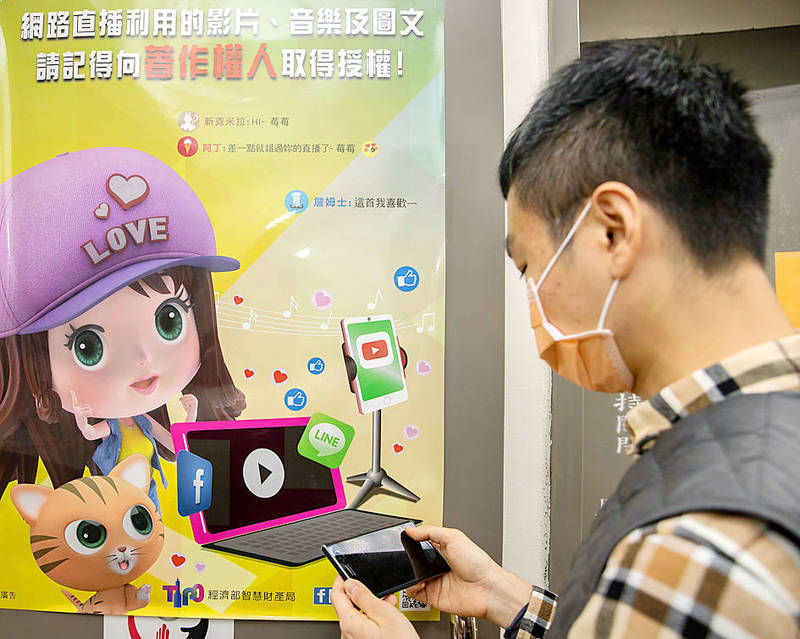 A man uses his cellphone in front of a poster promoting copyright law yesterday. Photo: CNA

FALLING SHORT: Premier Su Tseng-chang said that the amendments show Taiwan’s resolve to connect with the international community and become a CPTPP member

The Executive Yuan yesterday approved draft amendments to the Copyright Act （著作權法） and the Trademark Act （商標法） to bring the nation’s laws more in line with the requirements of the Comprehensive and Progressive Agreement for Trans-Pacific Partnership （CPTPP）, which Taiwan has applied to join.

Under the amendments, drafted by the Ministry of Economic Affairs, digital piracy, the illegal distribution of data and the public streaming of data would — legally speaking — be a case of Antragsdelikt, or “no trial without complaint.” That is, if the plaintiff or alleged victim does not bring charges, the police cannot initiate an investigation.

The amendments define copyright infringement as acts that violate the rights of others who have paid for their goods, acts that duplicate works in their entirety and acts that have cost rights owners more than NT$1 million （US$36,185）.

Premier Su Tseng-chang （蘇貞昌） told the weekly Cabinet meeting yesterday that the amendments demonstrate Taiwan’s resolve to connect with the international community and are in line with the government’s intent to join the CPTPP.

Considering that compact discs （CDs） are no longer the main source of copyright infringement, legal clauses — and fines — specifically mentioning or targeting the distribution of CDs were removed from the amendments.

The amendments to the Trademark Act no longer contain clauses stating that individuals must “clearly understand the ramifications of their actions” for them to be considered offenders of falsifying or forging trademarks.

Any action of forgery or falsifying trademarks would be considered an intentional or negligent offense, the amendments say.

Under the amendments, the forgery or falsifying of trademarks would be a criminal offense and offenders would face penalties to further protect sales and profits for owners with trademark rights.

Peer-to-peer sharing would be considered public streaming and reduplication, the amendments say, and would not be considered a case of Antragsdelikt.

Intellectual Property Office Deputy Director Chang Yu-ying （張玉英） said that the amendments clarify the definition of copyright infringement so that the public would not be continually charged with the offense, adding that this should reduce the judiciary’s workload.

“Our standing laws fall short of the requirements of the CPTPP,” Chang said, adding that this was the main reason why the ministry pushed for the amendments.

The amendments are essential legal elements that could allow Taiwan to join the CPTPP, Office of Trade Negotiations officials said, adding that they hoped the amendments would be ratified by the Legislative Yuan as soon as possible.

Taiwan applied to join the CPTPP in September last year and the government is doing its best to expedite the negotiation process in hopes of joining, they added.

The ministry is working on needed amendments to the Patent Act （專利法）, a source said on condition of anonymity.