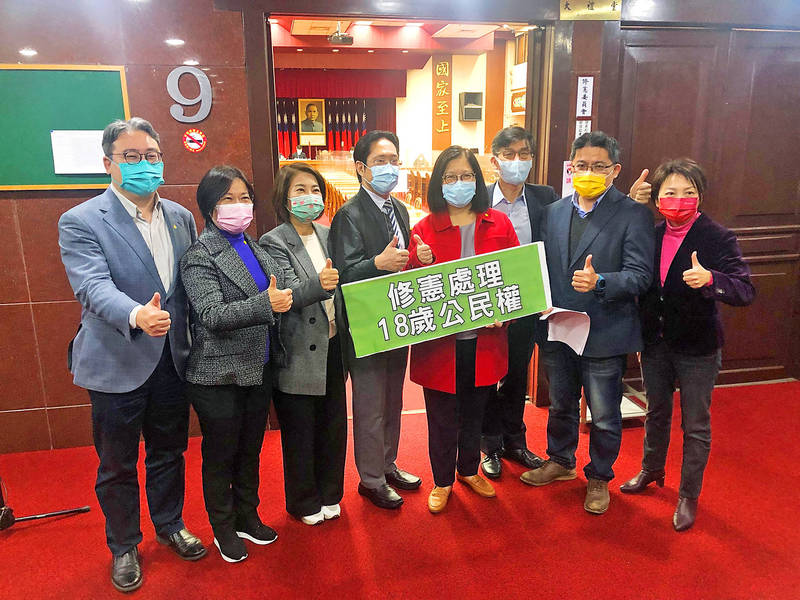 Legislators from the Democratic Progressive Party, Taiwan People’s Party and New Power Party give the thumbs-up at the Legislative Yuan in Taipei yesterday after the Constitutional Amendment Committee approved an amendment to the Constitution to lower the voting age to 18. Photo: CNA

A constitutional amendment that would see the voting age lowered to 18 from 20 passed a committee review at the legislature in Taipei yesterday.

The Constitutional Amendment Committee approved the amendment, which was cosponsored by the ruling Democratic Progressive Party （DPP）, the Taiwan People’s Party （TPP） and the New Power Party （NPP）, and which seeks to bring the voting age in line with most other democratic nations.

Fourteen Chinese Nationalist Party （KMT） legislators did not attend the meeting as part of an ongoing protest against the DPP for setting the agenda for the 39-member committee in a meeting on Jan. 6 without them being present.

The proposed amendment would grant Taiwanese who are 18 or older the right to vote. It would also pave the way for further legislation to lower the minimum age for running as a candidate in an election from 23 years old.

At a news conference prior to the committee meeting, TPP Legislator Jang Chyi-lu （張其祿） said the three parties had reached a consensus over the issue, despite having minor differences, such as where the amendment should be placed in the Constitution.

Jang said he was looking forward to lawmakers setting aside their differences and making progress with the legislation as soon as possible.

NPP Legislator Chiu Hsien-chih （邱顯智） said the constitutional revision is long overdue, as Taiwan had fallen behind many nations that have lowered the voting age to 18.

Chiu said he hopes the amendment would clear the legislature as soon as possible so it could be put to a vote in a referendum.

Based on the current distribution of seats in the legislature, where the DPP holds 61 seats and the KMT holds 39, it would take cooperation between the two main parties for any constitutional amendment to be passed.

If an amendment is approved by lawmakers, it must then be voted on in a national referendum and can only pass if half of all eligible voters cast ballots in favor of its passage.

KMT Legislator Chen Yu-jen （陳玉珍） said that the party supported the initiative to lower the voting age, but it strongly opposed the DPP deciding on the committee agenda without negotiating with the KMT, a move she described as lacking procedural justice.

However, even if KMT lawmakers had been present at the meeting on Jan. 6, it was likely that the committee, in which the DPP holds a majority of 21 seats, would have agreed to the DPP’s favored agenda.

DPP Legislator Chou Chun-mi （周春米） urged the KMT to stop boycotting meetings of the committee and take part in the legislative process.