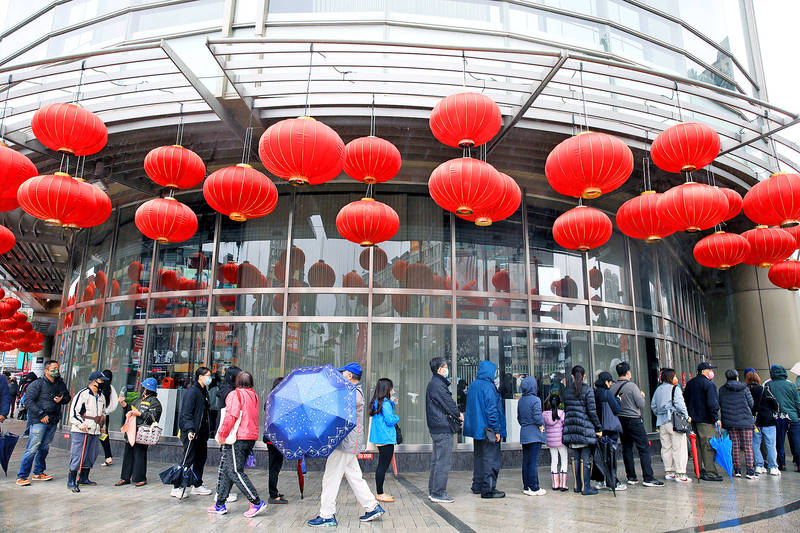 People line up outside a vaccination center administering the Moderna COVID-19 vaccine at a shopping mall in Taipei yesterday. Photo: Cheng I-hwa, Bloomberg

UNKNOWN SOURCES: The center was investigating how a man involved in a traffic accident and a nurse at Far Eastern Memorial Hospital had been infected

The Central Epidemic Command Center （CECC） yesterday confirmed 17 new domestic COVID-19 infections, all but three of which were linked to an outbreak in Taoyuan.

The first case in the outbreak, a janitor at Taiwan Taoyuan International Airport, was reported on Jan. 3. Since then, other airport personnel and their contacts have also tested positive and the disease has spread to the wider community.

Related clusters have emerged at factories, a bank and a steakhouse, and more than 90 cases have been reported so far, with about one-third of those confirmed to be the Omicron variant of SARS-CoV-2.

Tests for variants in other cases have either not been completed or the viral load was too low to obtain a result.

Of the 17 new domestic cases reported yesterday, 14 were linked to the steakhouse — an employee, 10 people who ate there either on Jan. 7 or Jan. 9, and three contacts of patrons who previously tested positive.

Minister of Health and Welfare Chen Shih-chung （陳時中）, who heads the CECC, urged anyone who ate at the restaurant — Tasty steakhouse on Zhongshan Road in Taoyuan’s Jhongli District （中壢） — from Jan. 7 to Wednesday last week to get tested for COVID-19.

The cluster at the steakhouse emerged after the restaurant hosted a year-end celebration for employees of a branch of Union Bank of Taiwan （聯邦銀行） on Jan. 7.

Some of the employees had unknowingly contracted COVID-19 from a bank client who was related to an infected airport employee.

Thirteen employees at the bank have tested positive for COVID-19, but the CECC did not say how many of them were at the dinner on Jan. 7.

The other three local cases reported yesterday were not linked to the outbreak in Taoyuan, the CECC said.

One was the boyfriend of a nurse at the Renai branch of Taipei City Hospital. The nurse tested positive for COVID-19 last week and the CECC has determined she was infected by a COVID-19 patient at the hospital.

Another was a man who yesterday visited a Taoyuan hospital following a traffic accident and tested positive for COVID-19. The CECC was investigating how he became infected.

The third is a nurse who works at Far Eastern Memorial Hospital. Her source of infection remained unknown, said Centers for Disease Control Deputy Director-General Philip Lo （羅一鈞）, deputy head of the CECC’s medical response division, as none of her colleagues, patients or relatives had tested positive.

She had not visited places frequented by any of the domestic COVID-19 cases recorded in the past few weeks and a further investigation was needed to determine how she contracted the disease, Lo said.

Of the 17 domestic cases, five were classified as breakthrough infections and the vaccination status of five others was still under investigation.

Four had not received any vaccine, two had received one jab and one received her second vaccine less than two weeks before being infected, the CECC said.

The CECC yesterday also reported 48 imported cases, but did not release information regarding the vaccination status of those infected.

《TAIPEI TIMES》 US senators back Taiwan for …