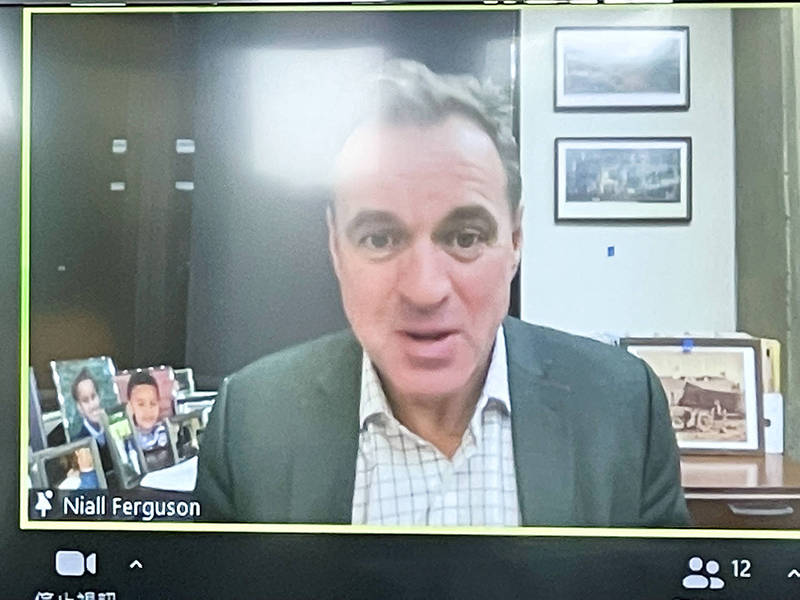 China would likely ramp up pressure on Taiwan next year, British historian Niall Ferguson said on Saturday, adding that deterrence is key to warding off Beijing’s threats.

Ferguson made the remarks at a talk organized by the Taipei School of Economics and Political Science Foundation.

Xi sees bringing Taiwan under Chinese control as the ultimate goal of his leadership, Ferguson said, adding that domestic problems in China, such as a slowing economy and a growing debt problem, has threatened the legitimacy of the CCP’s rule.

In the meantime, China has been facing a backlash from the international community over accusations that it covered up the initial outbreak of the COVID-19 pandemic in Wuhan in late 2019, as well as its practice of “wolf-warrior” diplomacy, he added.

The US and its allies should be committed to a credible deterrence strategy that could prevent “China from acting recklessly with respect to Taiwan,” Ferguson said. “Deterrence is key here.”

“And it’s not just the United States that can deter China. It’s the United States and [its] allies,” he said, alluding to countries such as Japan, which has expressed concerns over security and stability in the Taiwan Strait.

Ferguson said that a “cold war II” is happening between Washington and Beijing, and that if it “turns hot,” Taiwan would be a hotspot.

Washington could trigger a conflict if it pursues a policy of verbal commitment to Taiwan while continuing its confrontational strategy in its dealings with Beijing, Ferguson said.

It would be a “nightmare scenario” for Taiwan, as the nation would end up “being a battlefield in a battle that the United States is not actually properly prepared to fight,” he added.

“Ultimately in a cold war, there are two superpowers and your relationship with those superpowers is the most important decision you have to make in terms of a foreign policy,” Ferguson said, adding that he believed “Taiwan has an easy choice” to make on the issue.

While commending Taiwan’s efforts to fight off China’s information warfare campaign, Ferguson said that Taiwan “does not really have a particularly compelling self-defense strategy at this point” to counter growing military threats from China, citing his recent discussions at the Hoover Institution with Taiwanese military experts.

“It [Taiwan] is far from being a porcupine,” he said, a reference to reports by Western media last year that Taiwanese and US policymakers had been pursuing a “porcupine strategy” of increased coastal defenses and cruise missiles.