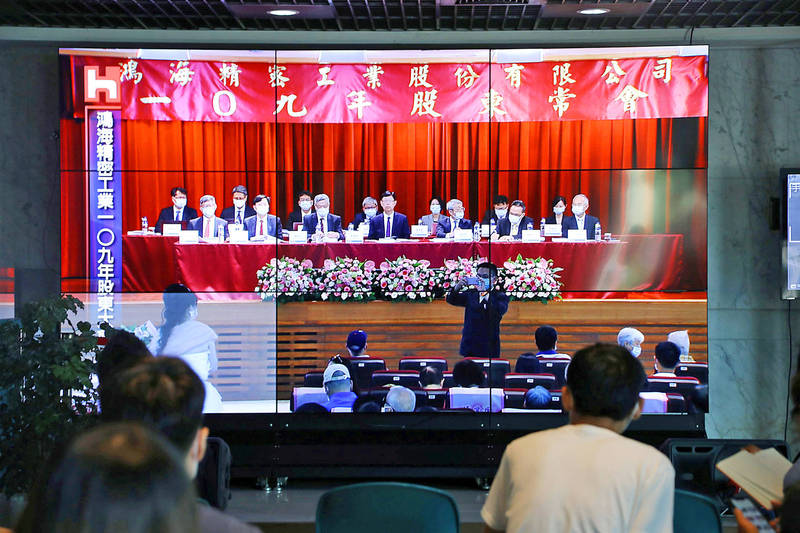 People wear masks to protect themselves from the coronavirus disease （COVID-19） while listening to the annual general meeting at the lobby of Foxconn’s office in Taipei, Taiwan, June 23, 2020. Photo: Reuters

BACK TO BUSINESS: The company has also agreed to all demands made by temporary workers in Chennai who staged a protest earlier this month

Hon Hai Precision Industry Co （鴻海精密） has spent an additional US$350 million on a subsidiary in India that industry sources believe is soon to begin manufacturing Apple Inc’s iPhone 13.

Hon Hai, known internationally as Foxconn Technology Group （富士康科技集團）, said in a statement on Friday that it has invested US$350 million in Foxconn Hon Hai Technology India Mega Development Private Ltd as part of its long-term development in the country.

The investment — part of Hon Hai’s expansion of its plant in Chennai in southeast India — would be used to set up a new production line exclusively for the assembly of the iPhone 13 series, industry sources said.

Media reports said that Apple has started to produce iPhone 13 models on a trial basis from Hon Hai’s factory in Chennai, with commercial production set to begin in February.

The company is to restart production at the Chennai factory after its temporary workers, mostly women, staged a protest on Dec. 18 over conditions in their living quarters and food quality, the Tamil Nadu Government said in a statement on Saturday.

The company has agreed to all demands made by the employees, the government added.

Hon Hai promised to improve the temporary employees’ working and living conditions by expanding their living areas, upgrading bathing facilities and providing drinking water, among other improvements, it said.

Separately, Hon Hai’s Hong Kong-listed subsidiary FIH Mobile Ltd （富智康） is planning a spinoff of its unit in India, Bharat FIH Ltd, and has set its sights on listing the Indian company’s shares on the Bombay Stock Exchange and the National Stock Exchange of India.

Hon Hai, which owns a 63.43 percent stake in Bharat FIH, said that the Indian unit submitted documents pertaining to a listing to the two exchanges on Wednesday.

The spinoff of the Indian unit would be completed in 2023, Hon Hai said.