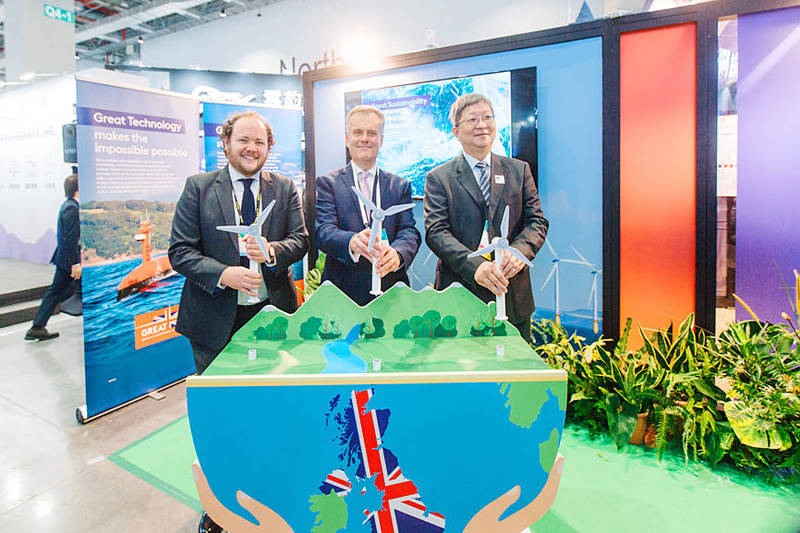 Tsai made the remarks at the opening of the three-day Energy Taiwan exposition at the Nangang Exhibition Center’s Hall 2 in Taipei.

Exports of Taiwan’s semiconductor manufacturing facilities in the third quarter exceeded US$7.3 billion, making it the biggest market in the region, Tsai said, citing Semiconductor Equipment and Materials International data.

The booming semiconductor industry is increasing demand for green power, while the government is committed to expanding the green energy industry, she said.

By 2025, the nation’s wind and solar power installations would create investments of up to NT$1.7 trillion, revenue of more than NT$2 trillion and 160,000 jobs, Tsai said.

“The UK is supporting Taiwan in its energy transition,” British Representative to Taiwan John Dennis said at the British pavilion later. “We are partnering with Taiwan to turbocharge its offshore wind sector and become the regional leader in clean growth.”

“Now, Taiwan is the UK’s largest offshore wind market in Asia-Pacific,” Dennis said. “I would like to congratulate the Bureau of Energy and the Ministry of Economic Affairs on their third round offshore wind development plan, and their target to achieve 20.5 gigawatts in capacity by 2035.”

Taiwan, although it was not part of the COP26 negotiations, has an important role to play, as it is the world’s 21st-largest economy and a top-25 emitter of carbon dioxide, he said.

The envoy also welcomed Taiwan’s commitment to carbon neutrality by 2050 and its plan to legislate a carbon pricing scheme.

“The UK’s credit agency ... has provided more than ￡500 million [US$659.78 million] in credit guarantees to three offshore wind farms in Taiwan,” he said.

It is the first time that the British Office Taipei has had a UK-themed pavilion at the annual energy exposition, the office said.

Also at the exposition are a handful of German and Dutch companies, including RWE Renewables Taiwan, Phoenix Contact and Boskalis Hwachi Offshore Wind Taiwan.

The COVID-19 pandemic has hindered the progress of some offshore installations, but the situation is expected to improve from next year, German Offshore-Wind Initiative Taiwan representative David Chiang （蔣大巍） said.

Many energy developers are competing for the third phase of Taiwan’s offshore wind farm plan, after the ministry in July started accepting applications, he said.

Floating wind technology is expected to become a new trend, Chiang said, adding that the government should ensure the consistency of energy policy to minimize the risks for energy developers.