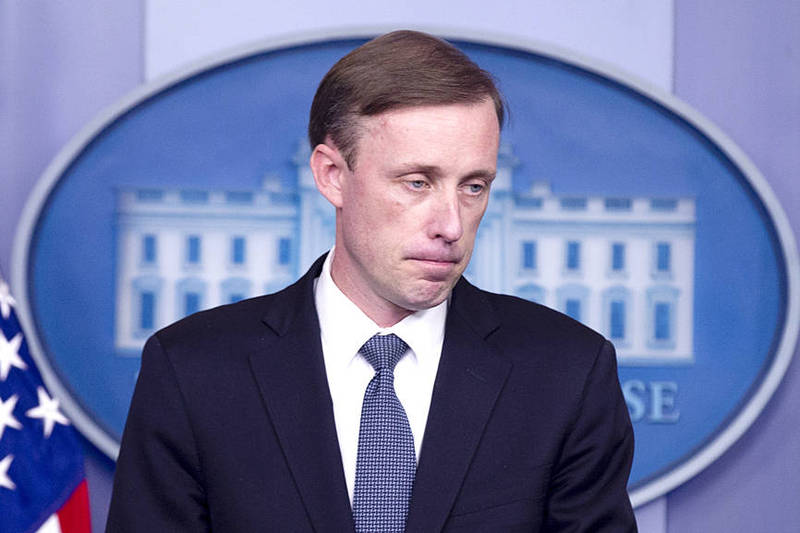 US National Security Adviser Jake Sullivan speaks at a news conference in the James Brady Press Briefing Room at the White House in Washington on Tuesday. Photo: EPA-EFE

BIDEN-PUTIN TALKS: The national security adviser said Washington’s efforts over the past eight months in the Indo-Pacific have been to avoid an invasion scenario

The US “will take every action” in diplomacy and deterrence to prevent the forcible unification of Taiwan by China in concurrence with a hypothetical Russian invasion of Ukraine, US National Security Adviser Jake Sullivan said on Tuesday.

Sullivan made the comment at a White House news conference following a teleconference between US President Joe Biden and Russian President Vladimir Putin earlier that day over the military standoff between Russia and Ukraine.

A reporter asked: “Some observers have described a nightmare scenario where President Putin invades Ukraine and also, simultaneously, President Xi [Jinping, 習近平] uses force to ‘reunify’ Taiwan with China. Is the US prepared to deal with such a scenario?”

“The United States is going to take every action that we can take, from the point of view of both deterrence and diplomacy, to make sure that the Taiwan scenario you just described never happens and to try to avert the invasion and deter the invasion into Ukraine,” Sullivan said.

“The sum total of the efforts we have undertaken over the course of the past eight months in the Indo-Pacific have also all been geared towards avoiding any kind of scenario where China chooses to invade,” he said.

Biden and Putin were still far apart after their two hours of talks on a crisis caused by Moscow massing of tens of thousands of troops near the border with Ukraine.

Biden delivered a simple message: Invade Ukraine again and face painful sanctions that will do resounding harm to your economy.

Putin had his own blunt take, telling the US president that “the Russian troops are on their own territory, and they don’t threaten anyone,” said Yuri Ushakov, who advises Putin on foreign affairs.

With no immediate breakthrough to ease tensions on the Ukraine question, the US emphasized a need for diplomacy and de-escalation, while issuing stern threats to Russia about the high costs of a military incursion.

Biden told Putin that the US would also “provide additional defensive material to the Ukrainians ... and we would fortify our NATO allies on the eastern flank with additional capabilities in response to such an escalation,” Sullivan said.

White House officials said that Biden is not interested in sending US troops to defend Ukraine.

However, Sullivan said that potential efforts to bolster regional allies could lead to additional deployments of troops to eastern European NATO allies.

Ushakov dismissed the sanctions threat during his own comments to reporters following the leaders’ meeting.

“While the US president talked about possible sanctions, our president emphasized what Russia needs,” Ushakov said. “Sanctions aren’t something new, they have been in place for a long time and will not have any effect.”

He described the presidents’ video conference as “candid and businesslike,” adding that they also exchanged occasional jokes.

In a brief snippet of the start of their meeting that was broadcast by Russian state television, the two leaders offered friendly greetings to each other.

“I welcome you, Mr President,” Putin said, speaking with a Russian flag behind him and a video monitor showing Biden in front of him.

At the White House, Sullivan called it “a useful meeting,” allowing Biden to lay out in candid terms where Washington stands.

Sullivan said that Biden and Putin had a “good discussion” on efforts to prevent Iran from becoming a nuclear power and called it an area where the two countries could cooperate.

“The more Iran demonstrates a lack of seriousness at the negotiating table,” the more there will be a sense of unity among the US and the parties to the 2015 nuclear accord, including Russia and the EU, he said.

Russian President Vladimir Putin attends a meeting with US President Joe Biden via a video call in Sochi on Tuesday. Photo: AFP