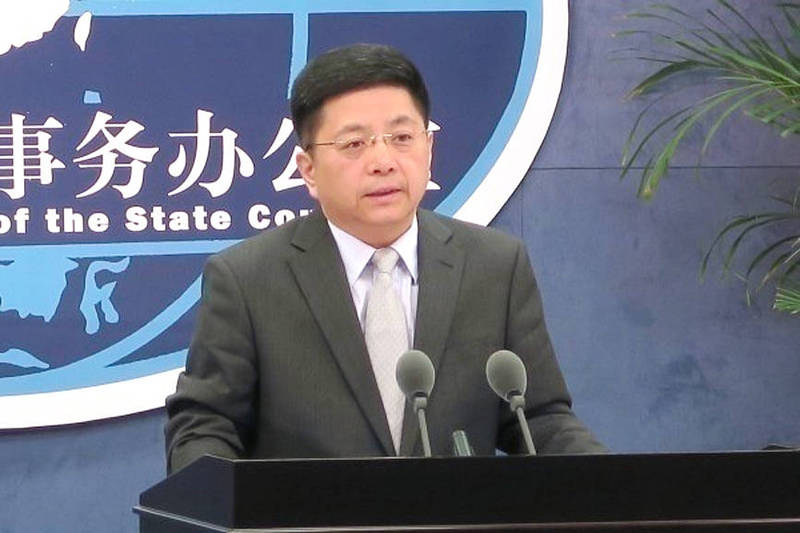 China’s Taiwan Affairs Office （TAO） yesterday confirmed that it would repatriate the suspect in a deadly Nov. 22 shooting in New Taipei City back to Taiwan from Xiamen.

Chinese authorities have decided to send the suspect, surnamed Huang （黃）, back to Taiwan to safeguard the well-being of people on both sides of the Taiwan Strait and maintain order in cross-strait exchanges, TAO spokesman Ma Xiaoguang （馬曉光） told a news conference.

However, Ma did not say whether the action was being taken in response to an extradition request from Taiwanese authorities.

While Ma did not provide the suspect’s full name, it has been reported in local media as Huang Yung-chun （黃泳群）. Huang is suspected of shooting a 45-year-old man, identified by his last name, Ho （何）, in the early hours of Nov. 22 in Sindian District （新店）.

Ho, who had been shot twice in the neck, was later pronounced dead upon arrival at a local hospital.

Hours after the incident, Huang left Taiwan for Xiamen, where he began a mandatory quarantine on arrival.

The motive for the shooting remains unknown and is still being investigated, Sindian police said.

Ma said Xiamen authorities immediately launched an investigation after learning about the incident from Taiwanese media reports on Nov. 23.

Huang had confessed to the crime after he was interrogated by Chinese authorities while still in quarantine, Ma added.

Taiwan and China in 2009 signed an agreement on jointly fighting cross-strait crime and providing judicial assistance, and Beijing has repatriated criminals to Taiwan in the past based on this agreement.

The Mainland Affairs Council yesterday welcomed the TAO’s decision and said it hoped that both sides could continue to work together based on the agreement to fight crime and protect the rights and welfare of the people across the Taiwan Strait.

The council said that it would cooperate with authorities in China to expedite Huang’s repatriation.