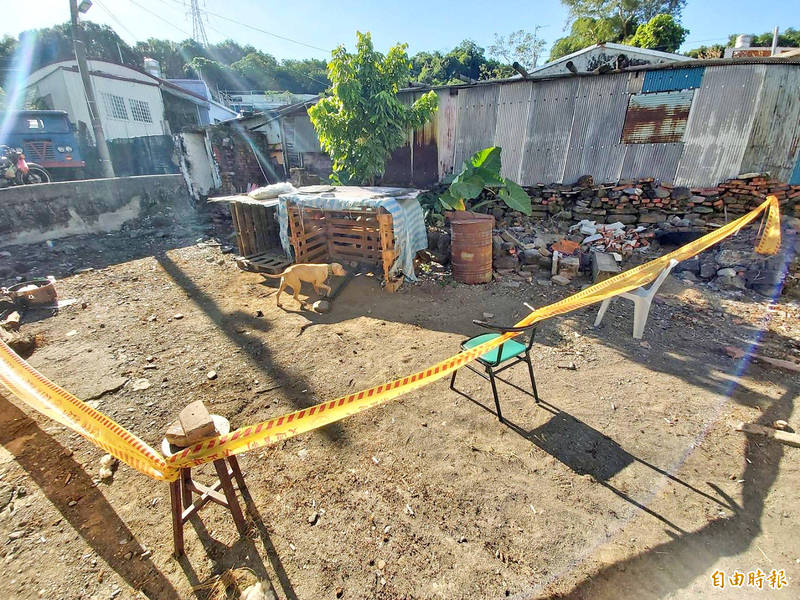 The owner of a pit bull mix in Pingtung County could face criminal charges after the dog bit and killed a boy.

The incident took place on Thursday in Chunrih Township （春日） when the boy’s mother briefly left home to buy groceries and the boy walked over to a neighbor’s home, investigators said, adding that the the dog — which appears to be a pit bull-Labrador mix and was tied to the neighbor’s fence — attacked the boy, biting him on the back.

The neighbor rushed the boy to the hospital, but he died of his injuries that evening, they said.

The dog was usually tied up with three chains, the owner said, adding that they felt responsible for the boy’s death.

Article 7 of the Animal Protection Act （動物保護法） states: “An owner shall prevent his animal from infringing on the life, body, freedom or property of others without due cause,” lawyer Lee Jung-tang （李榮唐） said.

Article 19 of the act states: “An aggressive pet showing up in a public place or a venue with public access must be acompanied by an adult human who shall take precautions to protect the public,” he said.

“This pit bull was not fitted with a muzzle, nor was it in a cage — no protective measures were put in place by the owner,” Lee said.

“They must be held responsible for injury or death caused by their dog. Just because it is tied up at home doesn’t free them from this responsibility,” he added.

The township office is assisting the mother with arranging the funeral and counseling, he said.

The Council of Agriculture said that from March 1, people would not be allowed to import or start raising pit bulls in Taiwan.

On that date, those who already raise pit bulls would need to notify the council and follow special regulations, it said, adding that offenders would face fines of up to NT$250,000 and could have their dog confiscated.

The Chinese-language United Daily News on Friday quoted National Pingtung University of Science and Technology researcher Lo Shu-shan （羅書姍） as saying that pit bulls are aggressive by nature, and do not let go if they bite someone.

People should not make eye contact with pit bulls and avoid looking like they are challenging them, Lo said.

Dogs are territorial, and feel like they are being challenged by children, who tend to talk loudly and make exaggerated movements, she said.