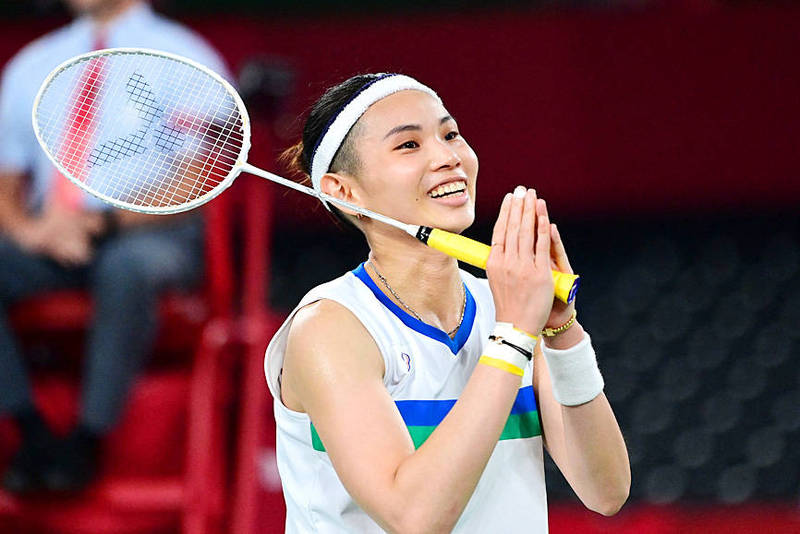 Taiwanese badminton ace Tai Tzu-ying （戴資穎） has won the Badminton World Federation （BWF） Female Player of the Year award in recognition of her achievements last year and this year, the federation said on Friday.

It is the first time Tai has won the award.

The period of consideration for the award stretched from November 2019 until the end of October due to disruptions caused by the COVID-19 pandemic over the past two years.

Tai lifted the Yonex All England trophy and then made each of the finals at three tournaments in Bangkok in January, before clinching the HSBC BWF World Tour Finals.

The world women’s singles No. 1 also powered her way to the singles final at the Tokyo Olympics this summer, but settled for silver after losing a thrilling match to China’s Chen Yufei （陳雨菲）.

She has not competed in any BWF events since the Olympics, which ended in early August.

“It’s a pity I can’t be in Indonesia for the HSBC BWF World Tour Finals,” Tai said. “I really miss competing in Indonesia, which has such enthusiastic fans. I never thought that I could win this award. I’ll continue to compete and try to achieve better results. I hope that fans will continue to support me.”

Tai would be competing in the upcoming BWF World Championships, which is to be held from Sunday next week to Dec. 19 in Spain.

Wang and Lee were named the Most Improved Player of the Year ahead of Pornpawee Chochuwong of Thailand, and Malaysians Aaron Chia （謝定峰）, Soh Wooi Yik （蘇偉譯） and Lee Zii Jia （李梓嘉）.

The duo won Taiwan’s first-ever Olympic gold medal in badminton by winning the men’s doubles at the Tokyo Games, and also clinched the men’s doubles title at the two Super 1000 Thailand Open tournaments in Bangkok in January and the BWF World Tour Finals in the same month.

“I’m really honored to win the BWF Most Improved Player of the Year and I hope that we can continue to improve,” Lee Yang said. “I’d also like to thank my partner as well as the people around us who have been supporting us and wishing us the best.”

“I think this is a great affirmation. It’s an honorable recognition for any athlete to be able to win a BWF award,” he added.