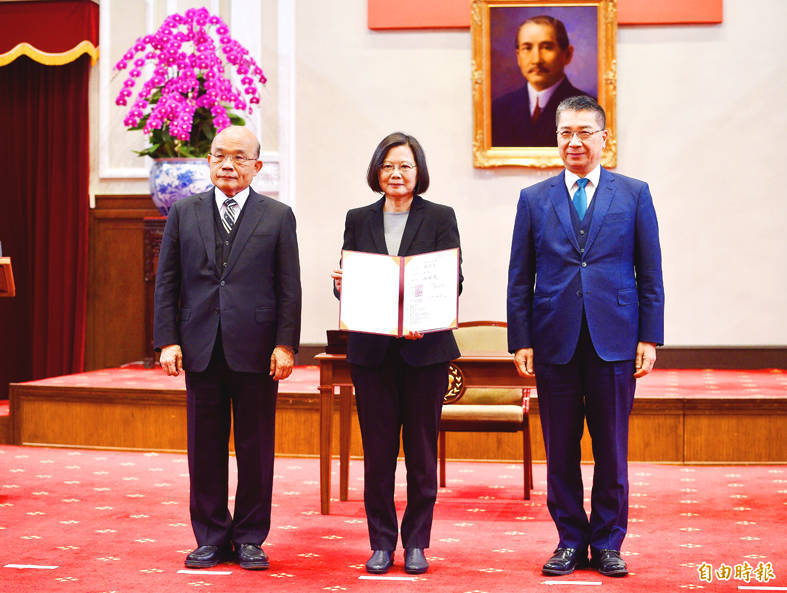 President Tsai Ing-wen, center, holds up a copy of the Stalking and Harassment Prevention Act at a news conference at the Presidential Office in Taipei yesterday. Photo: Peter Lo, Taipei Times

President Tsai Ing-wen （蔡英文） yesterday signed into law the Stalking and Harassment Prevention Act （跟蹤騷擾防制法）, which increases the punishments for stalking and harassment.

The act was passed by lawmakers across party lines and is to take effect in six months, she said.

“The act is an important first step toward the prevention of gender-based violence,” Tsai said.

Tsai also highlighted the murder of Peng Wan-ru （彭婉如）, a former director of the DPP’s Women’s Affairs Department and feminist advocate, as the day before the promulgation was the 25th anniversary of her death. The case remains unsolved.

Peng’s death increased awareness of the need to protect women, spurring the introduction of dedicated legislation.

“We believe we will do more and better along the way,” Tsai said.

The act, passed by the Legislative Yuan on Nov. 19, defines stalking and harassment as continuous or repeated actions that are related to sex or gender, frighten the victim and have negative effects on their daily lives.

It defines eight types of behavior as stalking or harassment, including spying, trailing, following, approaching, threatening, insulting and harassment over the Internet.

It also covers pursuing a relationship in an inappropriate manner, sending unsolicited messages, video clips or other objects by mail, tarnishing a person’s reputation and using their identity to buy goods.

The act stipulates a prison sentence of up to one year and a fine of up to NT$100,000 for those found guilty of any of those acts.

Perpetrators who additionally carry a dangerous weapon can be sentenced to a maximum of five years in prison and/or a fine of up to NT$500,000.