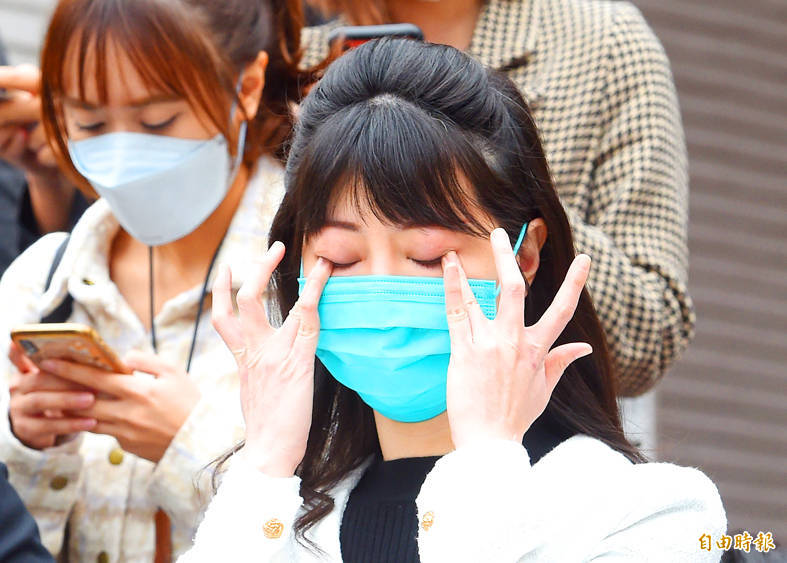 By Wang Ting-chuan and Chien Hui-ju / Staff reporters, with CNA

The boyfriend of Democratic Progressive Party Legislator Kao Chia-yu （高嘉瑜） was yesterday questioned by prosecutors after Kao on Tuesday reported that he had abused her.

Raphael Lin （林秉樞） was taken in for questioning at the Grand Forward Hotel in New Taipei City’s Banciao District （板橋） yesterday morning, and police confiscated his mobile phone, iPad and a data storage device, prosecutors said, adding that they have applied to place Lin in judicial detention.

Lin, who does not reside at his registered address, might attempt to flee or tamper with evidence, they said, adding that he has allegedly threatened victims in earlier abuse cases with publishing intimate images of them.

In the judicial complaint, Kao — who represents Taipei’s Neihu （內湖） and Nangang （南港） districts — accused Lin of physically abusing her during an altercation last month.

The case was first reported by Mirror Media magazine.

Lin allegedly beat Kao after he found text messages from a former partner on her phone, the magazine said.

Lin allegedly locked Kao up in a hotel room for two days, it said.

He used intimate images of her to coerce her to not break up with him, the magazine said.

Kao spoke to reporters at the Legislative Yuan yesterday, while her office provided photographs of her injured face, arms and legs.

“It was the darkest hour and most horrifying moment I have encountered in my life,” she said, breaking down several times while describing how Lin allegedly assaulted her.

“I used to present myself as a positive person, so when the attack happened, I felt embarrassed and initially did not know how to react,” she said.

Three days after the incident, she sought treatment at a hospital, she said.

Lin had apologized to her, she said, adding that he told her that it was the first time he had hit a woman and did not know what overcame him during the altercation.

Lin told her that he had been stressed and taking medication to treat a mental disorder, she said.

Cheng Yuan-hsiang （鄭遠翔）, a lawyer specializing in domestic violence cases, said: “Kao must stand up and lead by example. She must tell the public about her case and that despite her political status, she is still a potential victim. People must have courage to fight against violence and abuse of women, for the good of our society.”