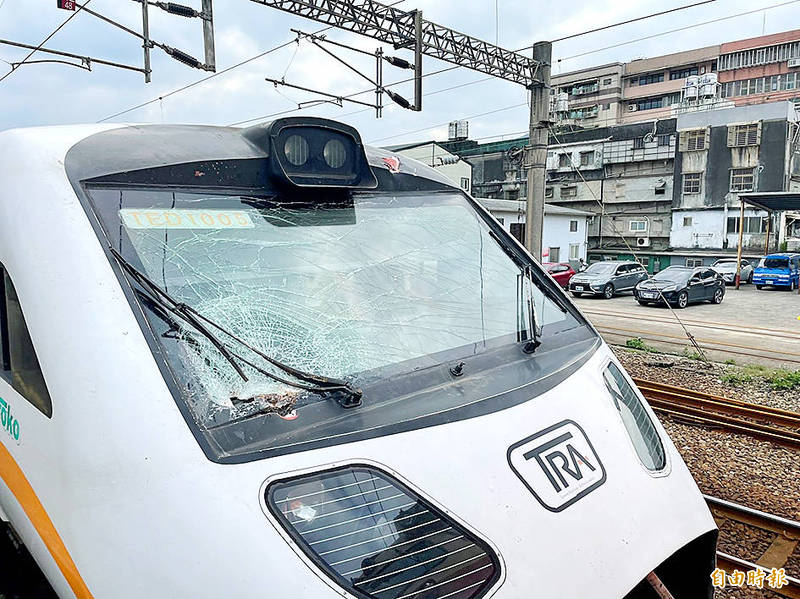 SAFETY UNDER SCRUTINY: Material fell from a construction site near the train tracks and broke the train’s windshield, but did not cause injury or death

Minister of Transportation and Communications Wang Kwo-tsai （王國材） yesterday ordered the dismissal of the director and a section chief of the Taiwan Railways Administration’s （TRA） construction department after a steel pile fell from a construction site onto the tracks, hitting a westbound Taroko Express train yesterday morning.

No deaths or injuries were reported.

Wang vowed to transform the agency into a state-run corporation within three years when he assumed his post following the April 2 derailment of an eastbound Taroko Express at the Cingshuei Tunnel （清水隧道） in Huailen County. That incident, which killed 49 people and injured more than 200, was caused by a crane truck that rolled onto the tracks from a construction site.

The material fell from a construction site near the tracks, first hitting scaffolding and then breaking the windshield of the moving train, it said.

The construction site, which is 5m to 8m from the tracks, is part of a six-year project to stabilize slopes along railway lines, the TRA said.

Safety procedures based on regulations governing the management of construction sites near railway lines were in place, the agency said.

Workers had been tasked with observing train traffic and ordering others to suspend work accordingly, the agency said, adding that after the incident, it ordered the suspension of work at the site.

The Transportation Safety Board is investigating the cause of the incident, it added.

Yesterday afternoon, Wang visited the site, which is near a slope.

The agency should put up higher fences to separate railway lines from construction sites and assess whether it is possible to conduct work during non-operating hours at night, he said.

After human error led to nine incidents involving TRA trains in the past three months, Wang told ministry officials in a meeting on Tuesday last week that he would fire a TRA department director if another incident caused by human error or breaches of standard operating procedures occurred.