《TAIPEI TIMES》 Lawmaker thanks public for concern over abuse reports 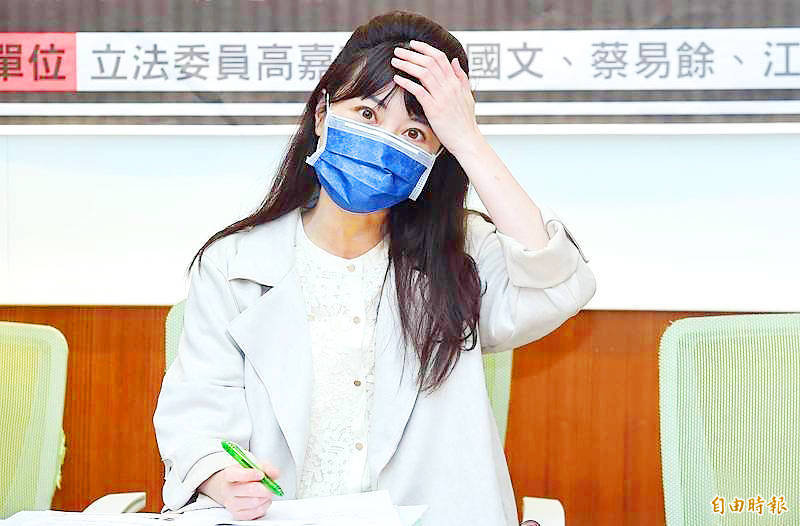 A spokesperson for Democratic Progressive Party （DPP） Legislator Kao Chia-yu （高嘉瑜） yesterday thanked members of the public for their concern after a report alleging she had been abused by her partner, sparking outpourings of sympathy and condemnations of violence from officials.

Kao yesterday filed a report against her boyfriend with Taipei police, claiming he physically assaulted her during a recent altercation. The case was transferred to the New Taipei City Police Department, as the alleged incident occurred in Banciao District （板橋）.

The New Taipei District Prosecutors’ Office said that its Crimes against Women and Children Division has started to collect evidence to determine whether to launch a full investigation.

A statement issued earlier in the day through the Legislative Yuan’s office said that Kao was preparing a response to the allegations, including relevant documentation.

“Chia-yu will bravely face the matter in the hopes of preventing another victim,” it said. “Thanks again to everyone for their concern.”

The Chinese-language Mirror Media early yesterday published a report alleging that Kao was beaten by her partner last month over messages from a former boyfriend on her phone.

He allegedly seized her phone and kept her in a hotel for two days, after which Kao sought medical attention for her injuries at National Taiwan University Hospital, it reported.

Photographs published by the magazine showed bruises on Kao’s neck, wrists and hands.

Public officials condemned the violence, while extending their sympathy to Kao.

In Taipei, the Department of Social Welfare said it is aware of the allegations, but urged confidentiality for those involved, while Taipei Mayor Ko Wen-je （柯文哲） condemned violence of any kind.

The department also urged victims of domestic violence to call the 113 Children and Women Protection Hotline or 110 emergency number.

The office “strongly condemns violence and would support Kao if she decides to take legal action,” he added.

Chang also denied claims by Kao’s partner that he is a national security adviser.

Legislative Speaker You Si-kun （游錫?） said he feels for Kao and wished her a speedy recovery.

Whether incidents get reported depends on a number of factors, he said, adding that the issue is not so simple it can be solved by a single policy.

Regardless, violence between intimate partners should not be treated with leniency or swept under the rug, Chen added.

Research has shown that it is hard to stop domestic violence once it begins, Chen said.

According to a Ministry of Health and Welfare survey, one in five women in Taiwan are subject to violence at the hands of an intimate partner.

Psychological abuse is the most common, followed by physical abuse, the ministry said yesterday.

A popular figure in the DPP, Kao rocketed into the public eye after becoming the youngest-ever member of the National Assembly in 2005.

She went on to serve as a Taipei City Councilor from 2010 to last year, when she was elected to the Legislative Yuan to represent Taipei’s Neihu （內湖） and Nangang （南港） districts.

Minister of Health and Welfare Chen Shih-chung talks to reporters in Taipei yesterday about allegations that Democratic Progressive Party Legislator Kao Chia-yu had been subject to physical abuse by her partner. Photo: CNA