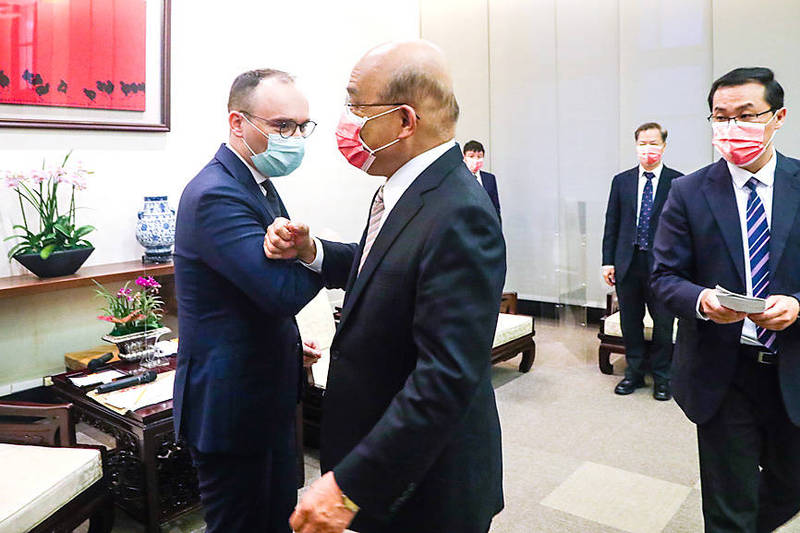 The head of the Lithuanian parliament’s Taiwan friendship group yesterday said he and other lawmakers from Baltic states are visiting Taiwan to show their support for the country amid Chinese threats.

“We are here to express solidarity with you,” Lithuanian Member of Parliament Matas Maldeikis told President Tsai Ing-wen （蔡英文） during a visit yesterday morning.

Maldeikis is leading a joint delegation comprising legislators from Estonia, Latvia and Lithuania who are to participate in a conference on democracy later this week in Taipei.

Maldeikis said during his meeting with Tsai that the delegation members respect Taiwanese’s “perseverance and wisdom” in managing to build a successful economy and promoting democracy while balancing a “complicated geopolitical environment.”

He said that the Lithuanian government’s pro-Taiwan policy has received wide support at home because “preserving freedom and the rules-based international order is of vital interest for both Lithuania and Taiwan.”

Maldeikis said that he hopes the soon-to-be-opened Lithuanian trade office will help expand the partnership between the countries and contribute to closer relations between Taiwan and the EU.

Tsai invited the lawmakers to attend the Open Parliament Forum on Thursday and Friday, which is to discuss the promotion of democracy and open parliaments.

Their visit marks the first time lawmakers from all three Baltic states have sent a joint delegation to Taiwan, Tsai said.

“Taiwan and the Baltic nations share similar experiences of breaking free from authoritarian rule and fighting for freedom,” she said.

“The democracy we enjoy today was hard-earned. This is something we all understand most profoundly,” she added.

As the world faces challenges caused by the expansion of authoritarianism and threat of disinformation, Taiwan is willing to share its experience combating disinformation with its European friends, Tsai said.

Other members of the delegation that visited the Presidential Office yesterday included Janis Vucans and Juri Jaanson, members of parliament and chairs of Taiwan friendship groups in Latvia and Estonia respectively.

They are to join lawmakers from Belize and Mexico for the two-day forum organized by the Ministry of Foreign Affairs, Legislative Yuan and US nonprofit National Democratic Institute.

A host of experts, academics and lawmakers from countries including Argentina, Australia, the Czech Republic, France, Germany, Japan, Sri Lanka, the UK and the US are to participate virtually, the ministry said.

The visit comes as Taiwan enhances exchanges with the EU and ties with the bloc’s member states, Lithuania in particular.