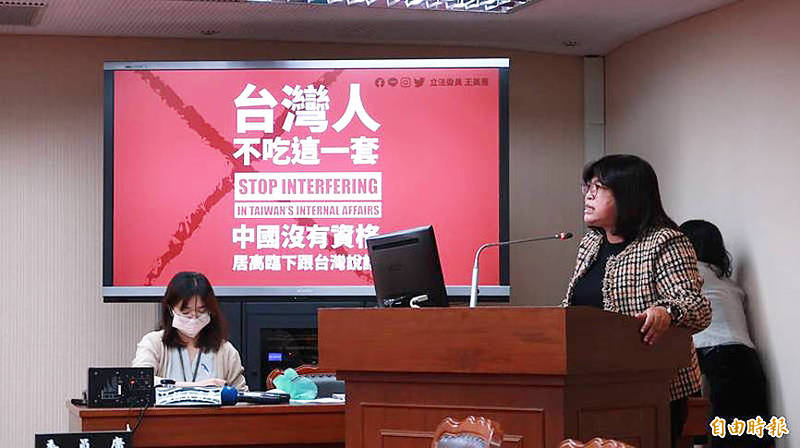 LOGIC: Generals’ pensions should be cut if they work with China, as taxpayers who pay for them could potentially be harmed, the DPP’s Wang Mei-hui said

An amendment that would cancel the pensions of retired military generals found to be collaborating with China was yesterday proposed by Democratic Progressive Party （DPP） Legislator Wang Mei-hui （王美惠）.

Wang cited comments made by retired air force general Hsia Ying-chou （夏瀛洲） during an interview with China’s Global Times newspaper as an example of how Beijing is attempting to use Taiwanese to change the narrative in Taiwan.

During the Global Times interview on Nov. 5, Hsia said: “Beijing has every right to send warplanes into Taiwan’s air defense identification zone, as it is part of Chinese territory.”

Wang proposed amending Article 9-3 of the Act Governing Relations Between the People of the Taiwan Area and the Mainland Area （臺灣地區與大陸地區人民關係條例）, which states that retired military or government officials may not “participate in any ceremony or activity held by ... the Mainland Area, which in [turn harms] the national dignity.”

In her proposed amendment, the penalty for such activity would be loss of the retiree’s pension, or a fine of up to NT$10 million （US$359,247）.

“Helping China spread propaganda could have an impact on national sovereignty, and could serve as a model for China to engage in similar united front tactics,” Wang said.

Retired generals’ pensions come from taxpayer money, so they should be canceled if the retiree is found causing potential harm to those paying the pension, she said.

The act was amended in 2019 to prevent retired military and government officials from participating in Chinese political activities, but the amendment did not address harmful speech, and therefore needs to be amended further, she said.

“China is a growing threat. We must show our resolve in defending ourselves; we must be united and persevere in the defense of our freedom, democracy and constitutional systems; we must persevere in protecting our sovereignty and independence,” she said.