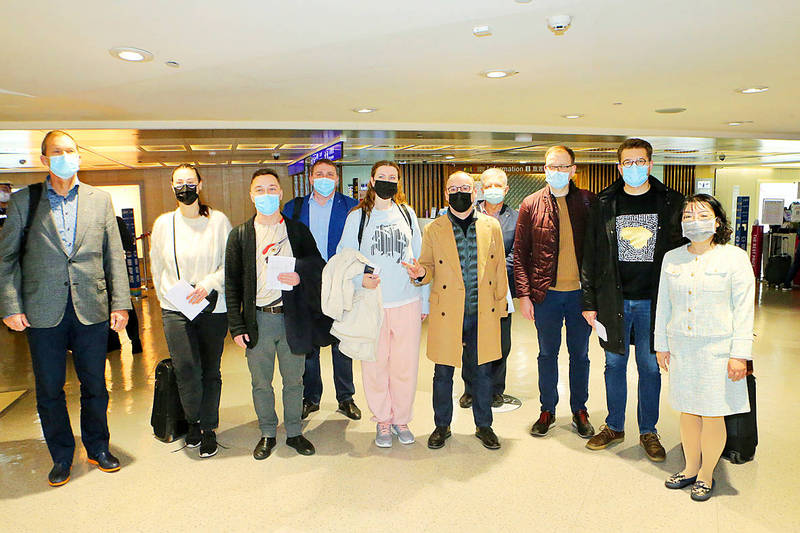 ‘BADGE OF HONOR’: Lithuanian lawmaker Dovile Sakaliene, who is on China’s travel ban list, said delegation members joked that they would be joining her on it soon

A delegation led by the chairman of the Lithuanian Parliamentary Group for Relations with Taiwan yesterday arrived in Taipei to participate in a conference on democracy later this week.

The group, led by Matas Maldeikis, a Lithuanian lawmaker and an outspoken critic of China, touched down at Taiwan Taoyuan International Airport at 6:18am yesterday.

Maldeikis said at the airport that he expected the trip to enhance understanding between Taiwan and Lithuania after cooperation between the two sides took a big step forward this past year.

“This trip will be another step in understanding each other because we are dealing with the same challenges,” he said.

Another member of the delegation, Lithuanian lawmaker Dovile Sakaliene, said she expected the Taiwan trip to be “inspiring,” as Lithuania knows how it feels to be next to the neighbor of “a large authoritarian regime.”

The Baltic state is near Russia, while Taiwan is just across the Strait from China.

She also said she saw it as a “badge of honor” to be on China’s travel ban list, as she is also critical of China’s communist regime.

Members of the delegation all joked that they would be joining the list soon, she said.

Sakaliene said that Taiwan is an important friend to Lithuania and Vilnius would “continue this friendship.”

The Lithuanian delegation would be joining other parliamentarians from Belize, Estonia, Latvia and Mexico at this year’s Open Parliament Forum on Wednesday and Thursday, where the promotion of democracy and open parliaments would be discussed, the Ministry of Foreign Affairs said.

While in Taiwan, they are to meet President Tsai Ing-wen （蔡英文）, Premier Su Tseng-chang （蘇貞昌） and Legislative Speaker You Si-kun （游錫?） and attend a dinner hosted by Minister of Foreign Affairs Joseph Wu （吳釗燮）.

You yesterday welcomed the delegation upon their arrival, saying that Taiwan opens its arms to all partners who love freedom and democracy.

The visit comes as Taiwan bolsters exchanges with the EU.