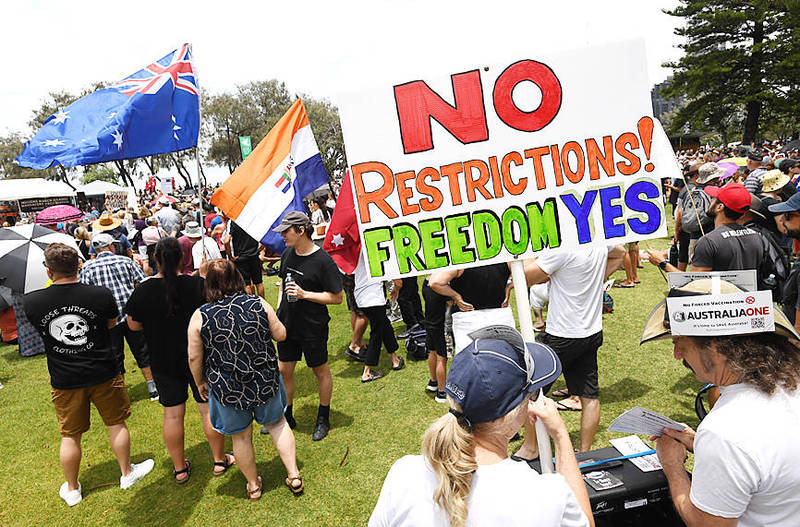 The former national flag of South Africa, center, is flown during a protest against mandatory vaccinations in Gold Coast, Australia, yesterday. Photo: EPA-EFE

UNCERTAIN COURSE: It remains to be seen whether the Omicron variant of SARS-CoV-2 would replace the globally dominant Delta variant, a US professor said

Australia and several other countries joined nations imposing restrictions on travel from southern Africa yesterday after the discovery of a new variant of SARS-CoV-2 sparked global concern and triggered market sell-offs.

Omicron, dubbed a “variant of concern” by the WHO, is potentially more contagious than previous variants of the disease.

It could take weeks for scientists to fully understand the new variant’s mutations and whether existing vaccines and treatments are effective against it. Omicron is the fifth variant of concern designated by the WHO.

The variant was first discovered in South Africa and has since been detected in Belgium, Botswana, Israel and Hong Kong.

A local German official said that the variant had probably arrived in the country in a traveler returning from South Africa.

Although epidemiologists say that travel curbs might be too late to stop Omicron from circulating globally, a string of countries, including the US, Brazil, Canada and EU nations, on Friday announced travel bans or restrictions for southern Africa.

Yestderday, Australia said it would ban non-citizens who have been in nine southern African countries from entering, and require supervised 14-day quarantines for Australians and their dependents returning from there.

Japan said it would extend its tightened border controls to three more African countries after on Friday imposing curbs on travel from South Africa, Botswana, Eswatini, Lesotho, Namibia and Zimbabwe.

Omicron has emerged as much of Europe is battling a surge in infections, and some states have reintroduced restrictions on social activity to try to stop the spread.

In the UK, the main opposition Labour Party yesterday called for a faster booster vaccination program, saying that the gap between the second dose and the booster jab should be cut from six to five months.

So far, the Delta variant remains dominant worldwide, accounting for 99.9 percent of US cases, and it is not clear whether Omicron would replace Delta, said Graham Snyder, a professor at the University of Pittsburgh Medical Center.

Omicron’s mutations are likely to render certain COVID-19 treatments — including some manufactured antibodies — ineffective, said David Ho, a professor of microbiology and immunology at Columbia University.