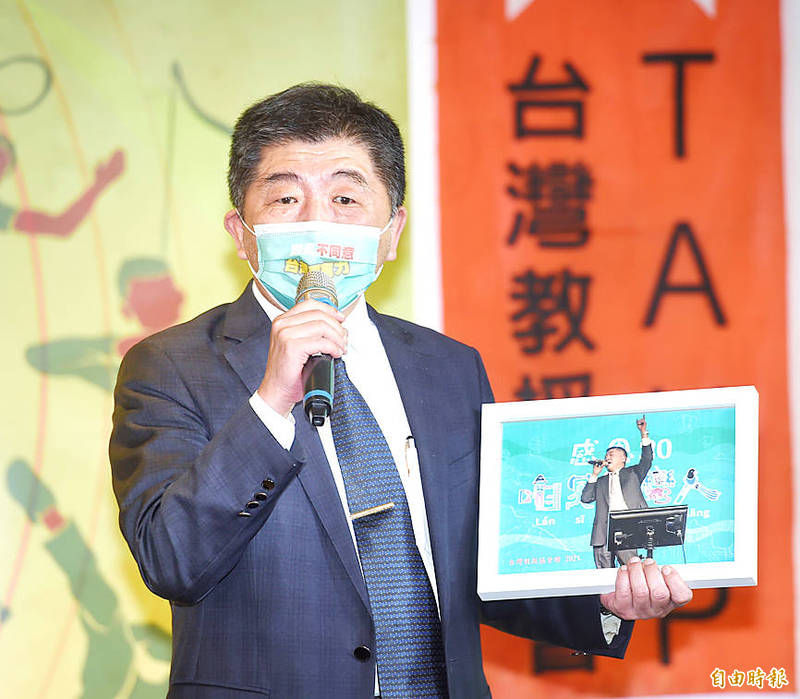 Minister of Health and Welfare Chen Shih-chung receives a photograph of himself singing during a fundraising event in Taipei yesterday. Photo: Fang Pin-chao, Taipei Times

Minister of Health and Welfare Chen Shih-chung （陳時中） yesterday said he would not sing in public for a while, as his mood for singing has been affected by a controversial video of him that circulated online earlier this month.

Chen, who heads the Central Epidemic Command Center （CECC）, made the remark at a Taiwan Association of University Professors’ Thanksgiving fundraiser in Taipei yesterday.

The clip, which began circulating on Nov. 10, shows him singing indoors without a mask, which led to accusations that he had contravened COVID-19 prevention rules during a nationwide level 3 pandemic alert.

However, as the video was recorded on June 15 last year, when Taiwan did not have many domestic COVID-19 cases, Premier Su Tseng-chang （蘇貞昌） on Nov. 12 said that it was part of a Chinese disinformation campaign to demoralize the nation and discredit the CECC.

At yesterday’s event, Chen refused the host’s invitation to sing with him, saying that he had not felt like singing in public since the controversy.

It reminded him that he should work harder and focus on his duties, he said.

“I was confident that I was a good singer because everyone applauded, but after seeing the video on TV, I found out that I don’t have the moves, nor did I sing very well,” he said.

Maybe the people only applauded because he is the health minister, Chen said.

When he was in elementary school, he used to sing songs with a friend, but when asking the friend about his singing, the friend said that all the songs he sang sounded the same, Chen said.

“His reply was a heavy blow to me,” Chen joked. “After that day, I didn’t dare to sing in public for a long time.”

He still sometimes sings in the bathroom, but his wife has told him that his tempo and pitch are slightly off, he said.

After she offered him singing lessons, he also lost interest in singing at home, he said.