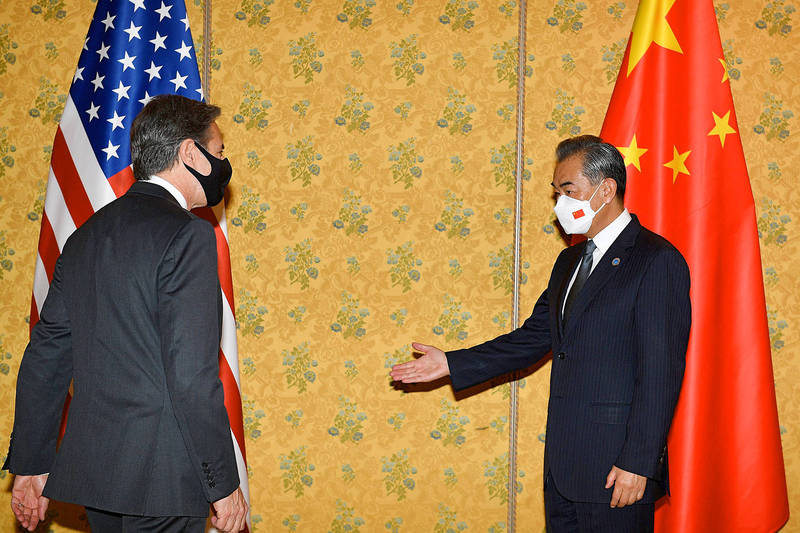 Chinese Minister of Foreign Affairs Wang Yi welcomes US Secretary of State Antony Blinken for a meeting on the sidelines of the G20 Leaders’ Summit in Rome yesterday. Photo: AP

POSITION UNCHANGED: The US secretary of state’s statement came at a meeting with his Chinese counterpart after US president Biden reiterated Washington’s defense pledge

US Secretary of State Antony Blinken yesterday told his Chinese counterpart that the US opposes actions by China that have increased tensions across the Taiwan Strait, a senior US Department of State official said.

During the hour-long meeting with Chinese Minister of Foreign Affairs Wang Yi （王毅） on the sidelines of a G20 summit in Rome, Blinken made “crystal clear” that Washington opposes any unilateral changes by Beijing to the “status quo” there, the official said.

An increase in Chinese military exercises in Taiwan’s air defence identification zone in the past few months are part of what Taiwan views as stepped-up military harassment by Beijing.

The US wants to manage the intense competition between the world’s two largest economies responsibly, the state department official said, adding that both sides acknowledged that open lines of communication are paramount.

While the US, like most countries, has no formal ties with Taiwan, Washington is the nation’s most important international backer and main arms supplier, and is required by law to provide it with the means to defend itself.

Washington has long followed a policy of “strategic ambiguity” on whether it would intervene militarily to protect Taiwan in the event of a Chinese attack, although US President Joe Biden last week said that the US would come to Taiwan’s defense if necessary.

Blinken made clear that Washington had not changed its “one China” policy regarding Taiwan, the official said.

He and Wang did not discuss a recent Chinese hypersonic weapons test that military experts say appears to show Beijing’s pursuit of an Earth-orbiting system designed to evade US missile defenses, the official said.

Separately, Chinese President Xi Jinping （習近平） on Saturday called for mutual recognition of COVID-19 vaccines based on the WHO’s emergency use list, according to a transcript of his remarks published by China’s Xinhua news agency.

Speaking to the G20 Leaders’ Summit via video link, Xi said that China had provided more than 1.6 billion COVID-19 shots to the world, and was working with 16 nations to cooperate on manufacturing doses.

“China is willing to work with all parties to improve the accessibility and affordability of COVID-19 vaccines in developing countries,” Xi said.

Xi reiterated China’s support of the WTO making an early decision on waiving intellectual property rights for COVID-19 vaccines, and he called for vaccine companies to be encouraged to transfer technology to developing countries.

Two Chinese vaccines have been included in the WHO’s emergency use list.

“Major economies should adopt responsible macroeconomic policies to avoid negative spillover effects to developing countries and maintain the steady operation of the international economic and financial system,” he said.

Xi’s statement came as G20 leaders endorsed a global minimum tax on corporations, a linchpin of new international tax rules aimed at blunting the edge of tax havens amid skyrocketing profits of some multinational businesses.

The move was hailed by US Secretary of the Treasury Janet Yellen as benefiting US businesses and workers.