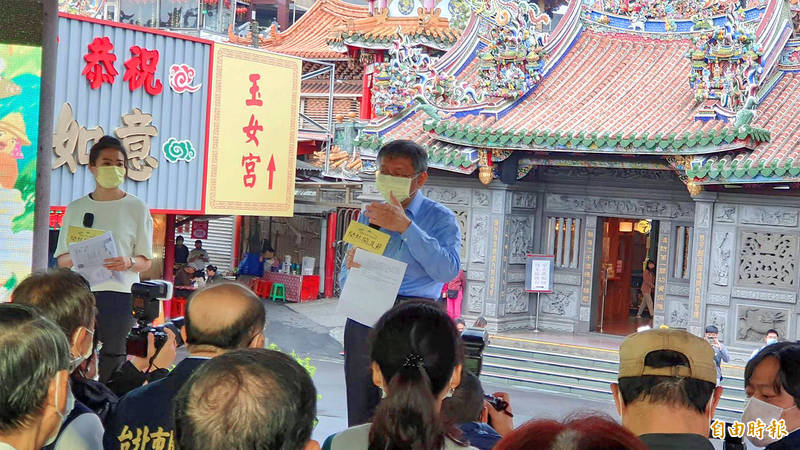 NEW RESTAURANT RULES: Unvaccinated people would have to sit separately at tables with dividers, Ko said, as he expanded on his post-pandemic plans for Taipei

Taipei is likely to set up a COVID-19 vaccination passport system that would result in people being seated in different areas in restaurants depending on vaccination status, Taipei Mayor Ko Wen-je （柯文哲） said yesterday.

Ko made the remark at a news conference to promote the Fun Guandu festival at Guandu Temple in the city’s Beitou District （北投）.

During the event’s opening speech, Ko said he expects that more than 70 percent of Taipei residents would be fully vaccinated by the end of January and that Taiwan’s COVID-19 situation would ease fully before the Lunar New Year next year.

“Theoretically, people would not need to wear a mask after having received two doses,” he said, adding that with the expected progress in COVID-19 drug development, Taiwan could ease border restrictions in January.

“People who have not been vaccinated should go get their shots as soon as possible, because we will introduce a vaccination passport soon,” Ko said.

More than 60 percent of Taipei residents have received at least one vaccine dose, he said.

As many people who are registered elsewhere live in the capital, it is possible that the actual first-dose coverage is about 70 percent, with 30 percent of people in Taipei being fully vaccinated, Ko said.

“As vaccine production has accelerated and Taipei can administer about 40,000 doses per day, I hope that the full-vaccination rate reaches about 70 percent by the end of the year,” he said.

Asked about Ko’s statement on mask wearing, Minister of Health and Welfare Chen Shih-chung （陳時中） said that the mask mandates would not be fully eased before the Lunar New Year.

Centers for Disease Control Deputy Director-General Chuang Jen-hsiang （莊人祥）, who is a CECC spokesman, said that as long as there are COVID-19 outbreaks abroad, wearing a mask would be the “last line of defense” to prevent imported cases from spreading.