《TAIPEI TIMES》 President thanks Blinken for support on UN hopes 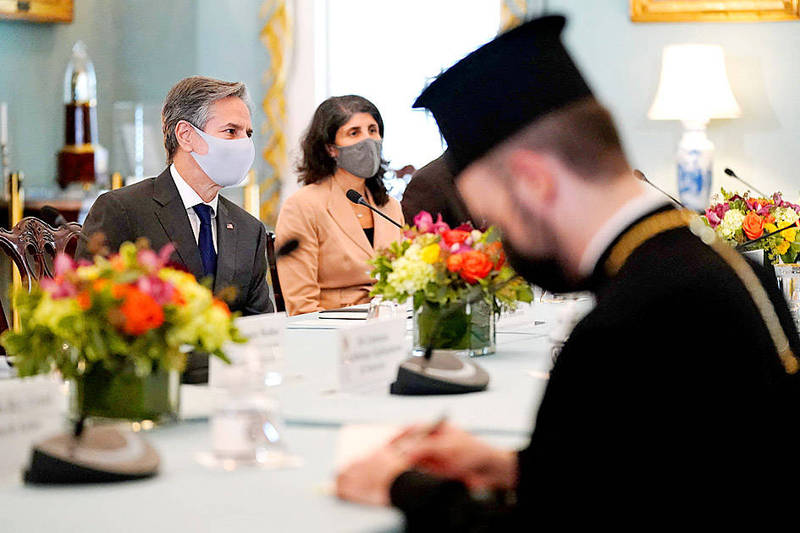 US Secretary of State Antony Blinken, left, attends a meeting at the US Department of State in Washington on Monday. Photo: AFP

TACKLING CHALLENGES: The US Secretary of State said that Washington has urged other UN member states to support Taiwan’s robust and meaningful participation

President Tsai Ing-wen （蔡英文） on Tuesday thanked US Secretary of State Antony Blinken for voicing support for Taiwan’s participation in the UN system.

“We will continue to work with the #US & other like-minded partners to overcome the challenges facing the international community,” Tsai wrote on Twitter, while also expressing her appreciation for Blinken’s comments.

The Ministry of Foreign Affairs wrote on social media that Blinken’s “support for the country’s meaningful participation in the activities, mechanisms & meetings of @UN specialized agencies is key to successfully tackling global challenges.”

Meanwhile, the Chinese Nationalist Party （KMT） wrote: “The KMT will work with our American friends to promote TWN’s int’l visibility & contribution for regional interests & stability in the Taiwan Strait.”

In a statement on Tuesday, Blinken said that the US had urged other UN member states to support “Taiwan’s robust, meaningful participation throughout the UN system and in the international community.”

Taiwan has not been a UN member since the passage of the resolution, limiting its participation in the body’s specialized agencies.

Since Taiwan was removed from the UN, it took part in the annual World Health Assembly — the WHO’s decisionmaking body — as an observer from 2009 to 2016, and has participated in the International Civil Aviation Organization’s triennial assembly only once, in 2013.