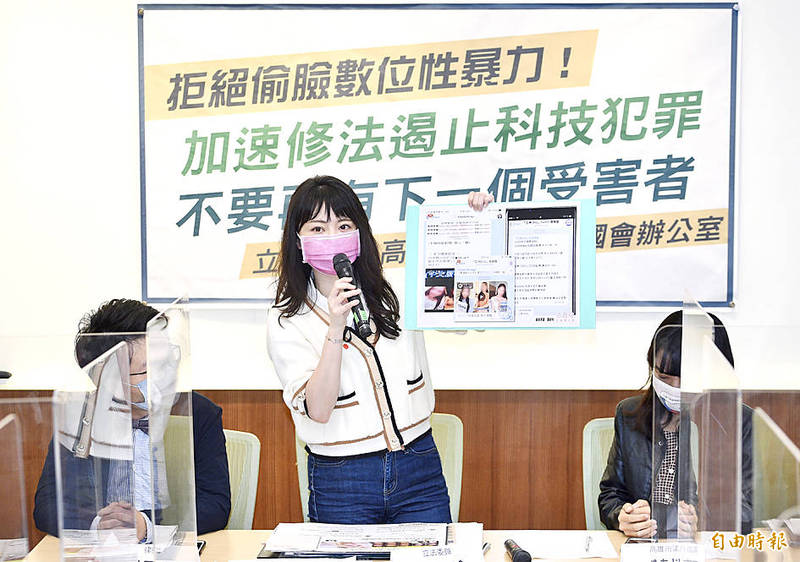 SEXUAL VIOLENCE: The justice ministry is looking at the examples and experiences of other nations to serve as a reference for drafting new regulations, an official said

Kao and Huang are two of the victims in an ongoing investigation into a “deepfake video” case, in which YouTuber Chu Yu-chen （朱玉宸）, 26, also known as Xiaoyu （小玉）, was last week listed as a suspect for allegedly using deepfake technology to create and sell sexual videos featuring the likenesses of female politicians, online influencers and celebrities.

Deepfake pornography is made by superimposing facial images of people onto existing pornographic videos using deep learning technology, a type of artificial intelligence.

She denounced Chu’s action, who, along with two other suspects, allegedly made about NT$11 million （US$394,605） from selling deepfake videos.

“Public figures should not be humiliated in such ways,” Huang said.

“While viewing it, I got very angry at first, then felt very disgusted, and nauseated, and almost threw up,” she said. “It is a sexual assault on women. We hope all victims will have courage to sue the offenders and punish them through the courts.”

“It could undermine national security,” she added. “Taiwan is a democratic society, and malevolent forces could use deepfake technology to circulate fake videos during election campaigns to manipulate the vote.”

They also called on the Ministry of Justice and other government agencies to focus on the issue and come up with proposals to amend the law.

Ministry official Chi Chih-kuang （紀志光） told the news conference that the case was a reflection of the rapid developments in information technology and exposed how the expense of engaging in such crimes has fallen, further encouraging sexual violence and breaches of privacy rights.

The ministry is looking at regulations, examples and experiences from other countries relating to deepfake exploitation, and will hold discussions with professionals in the field to propose amendments as soon as possible, Chi said.