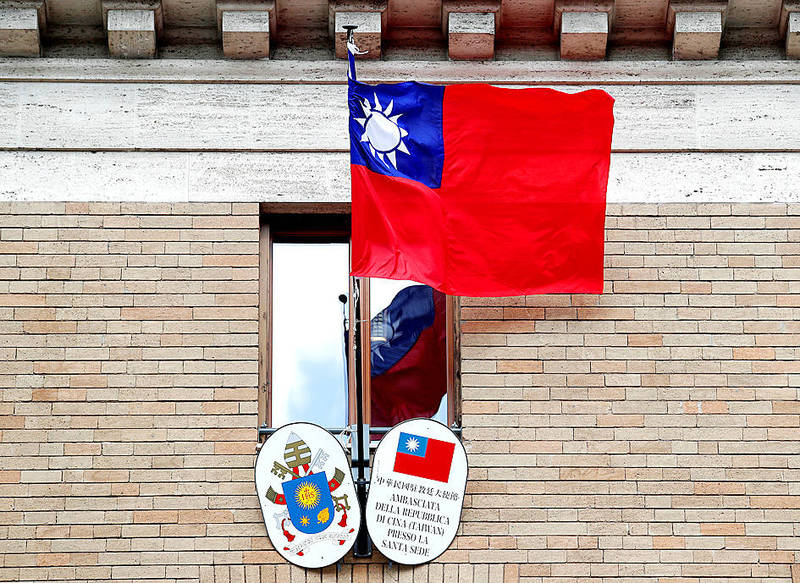 The national flag is pictured outside the Taiwanese embassy in the Vatican on March 14, 2018. Photo: Reuters

PRESSURE: An Italian report said that a Vatican official had approached Beijing about establishing diplomatic relations and was told to first sever ties with Taiwan

Taiwan-Vatican diplomatic ties remain stable, the Ministry of Foreign Affairs said yesterday after a report published on Sunday by Italian newspaper Corriere della Sera claimed that Beijing had been pressuring the Vatican City into severing ties with Taiwan and establishing formal relations with China.

The report said that a Vatican foreign affairs official had approached Beijing about a framework for establishing diplomatic relations and that Beijing had told the official that the Vatican would first have to sever ties with Taiwan.

The Vatican had hoped to first establish an embassy in Beijing and then slowly reassess its relationship with Taiwan, but China had not agreed to such a proposition, leaving the negotiations deadlocked, the report said.

Ministry of Foreign Affairs spokeswoman Joanne Ou （歐江安） yesterday in Taipei said that all communication channels with the Vatican were open and diplomatic ties remained strong.

The ministry would not further comment on conjecture or information from unnamed sources, Ou said.

Giving an example of the healthy state of Taiwan-Vatican relations, Ou said that the government, the Catholic Church in Taiwan and civic organizations had been providing assistance to Vatican City officials throughout the COVID-19 pandemic.

The Vatican had also placed President Tsai Ing-wen （蔡英文） at the top of a list of people it thanked for providing well-wishes to Pope Francis following his surgery in July, she said.

The Pope also offered his best wishes to Tsai on Double Ten National Day, she added.

The ministry would continue to seek opportunities to cooperate with the Vatican and strengthen the relationship, Ou said.

In related news, Minister of Foreign Affairs Joseph Wu （吳釗燮） departed Taiwan late on Sunday to visit Slovakia and the Czech Republic, a rare trip to nations with which Taiwan has no official diplomatic relations.

Wu today is due to deliver the keynote address at a conference hosted by Bratislava-based think tank GLOBSEC, before receiving a medal from Czech Senate President Milos Vystrcil and meeting Prague Mayor Zdenek Hrib, the ministry said.

During his visit, Wu is to speak at an online conference organized by the Inter-Parliamentary Alliance on China in Rome on Friday, it said.

The 66-person delegation departed Taiwan on Wednesday last week and is visiting the Czech Republic, Slovakia and Lithuania as part of the government’s strategy to boost trade and economic ties with central and east European nations.

The three nations’ relations with Taiwan have improved over the past few years, despite pressure from Beijing. They have donated more than 850,000 COVID-19 vaccine doses to Taiwan to reciprocate mask donations made by Taipei last year.