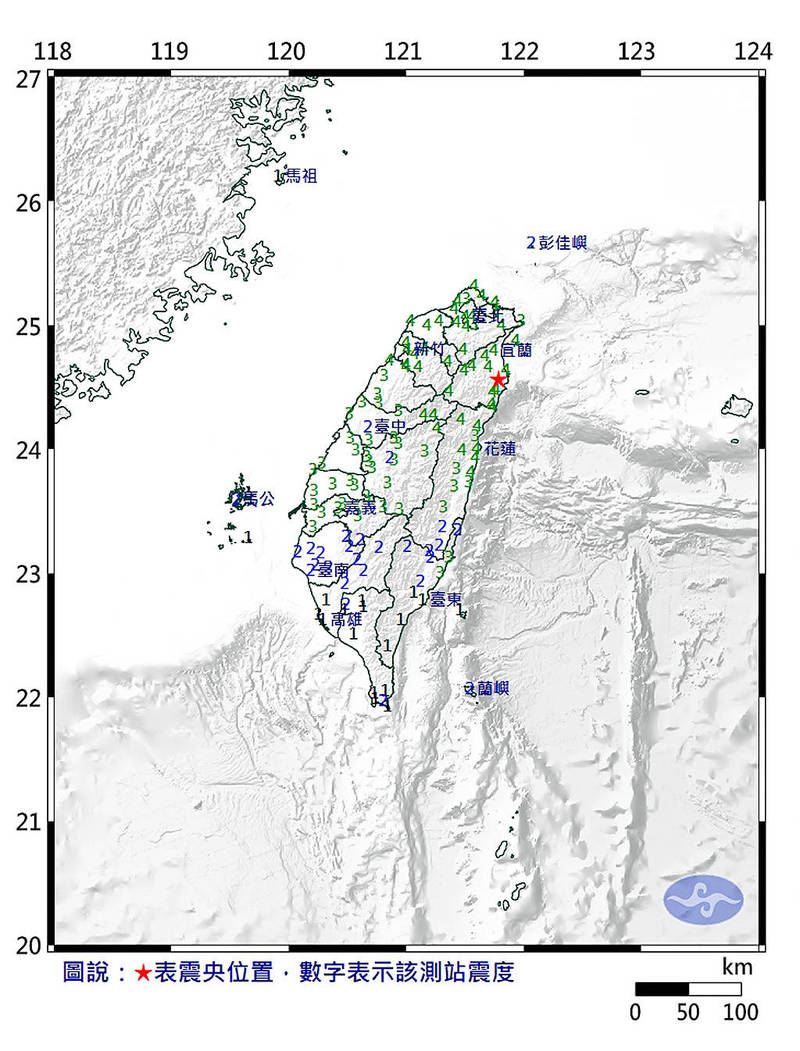 AFTERSHOCKS LIKELY: A hiker was hurt by falling rocks at the Taroko National Park, while a tower crane was damaged at a construction site in New Taipei City

By Chen Hsin-yu and William Hetherington / Staff reporter, with staff writer and CNA

It was followed at 1:11pm by a magnitude 6.5 quake centered near Yilan County’s Nanao Township （南澳） at a depth of 66.8km.

A magnitude 5.4 earthquake followed less than a minute later, with its epicenter near the county’s Datong Township （大同）, at a depth of 67.3km.

The magnitude 6.5 earthquake was the strongest quake recorded in Taiwan this year. Its intensity, which measures its actual effect, reached 4 on the nation’s 7-tier intensity scale in northern and northeastern Taiwan.

A woman among a group of nine hikers was hurt by falling rocks at the Taroko National Park in Hualien County.

A vehicle was damaged by falling rocks along the Suhua Highway, but no injuries were reported.

Some train and MRT services were halted so that carriages could be evacuated for teams to perform maintenance and safety checks.

Aftershocks of magnitude 4 or greater are expected over the next three days, the bureau said.

Bureau Seismology Center Director Chen Kuo-chang （陳國昌） said the center’s initial assessment was that the magnitude 5.4 earthquake was an aftershock of the magnitude 6.5 quake.

The magnitude 6.5 earthquake was the largest quake recorded since 1973 in the subduction zone 40km underground, Chen said.

The quake’s energy was released quickly and it lasted a short time, because it occurred in a subduction zone, he said.

“We might see more aftershocks of magnitude 4 or greater over the next three days, but there is no cause for concern,” he added.

There have been more earthquakes of magnitude 5 or greater this year than in the past two years, Chen said.

“The number of earthquakes over the past two years was a bit on the low side, so the greater number this year is likely due to a buildup of energy that was waiting to be released,” Chen said. “It is nothing to be worried about.”

The effects of yesterday’s earthquakes were felt far from their epicenters due to their depth, he said.

Most of northern Taiwan experienced level 4 tremors from the two bigger earthquakes, which were not enough to cause structural damage, he said, adding that generally buildings are damaged at level 5 or higher.

In other developments, the bureau said dry and warmer weather is expected in northern Taiwan from today to Wednesday as seasonal winds weaken, following several days of rain.

Bureau forecaster Liu Pei-teng （劉沛滕） said a tropical depression over the waters east of the Philippines could become a tropical storm yesterday evening, but added that it would not threaten Taiwan.

A bulldozer clears debris from a section of the Suhua Highway in Yilan County following an earthquake yesterday. Photo courtesy of a reader via CNA

A hotel signboard lies on the road following an earthquake in Yilan County’s Jiaosi Township yesterday. Photo courtesy of a reader via CNA

A crane damaged by an earthquake is pictured on top of a high-rise that is under construction in New Taipei City’s Sinjhuang District yesterday. Photo courtesy of the New Taipei City Government Public Works Department