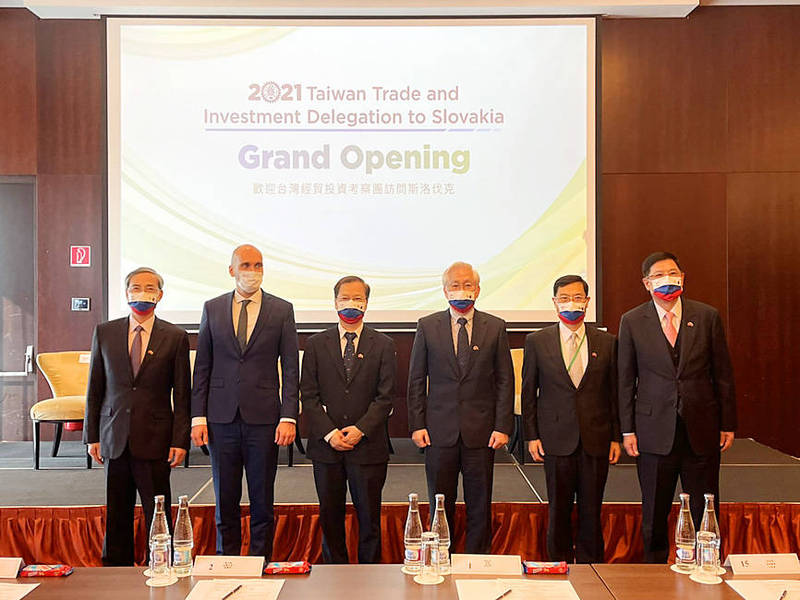 A Taiwanese delegation to Slovakia signed seven memorandums of understanding （MOU） with public and private entities, including a space technology pact that would bring to Taiwan a project related to a blockchain application used by the European Space Agency, officials said on Friday.

The two sides on Thursday held a bilateral cooperation conference to exchange views on technology, higher education and innovative research, the Ministry of Science and Technology said in a statement yesterday.

The Taiwanese delegation was received by Slovak Academy of Sciences vice president for international relations Zuzana Panczova and other representatives from the Slovak Ministry of Education and Slovak Research and Development Agency, it said.

Since the ministry and the academy in 1996 signed a science and technology cooperation agreement, they have funded more than 20 three-year joint research projects, the ministry said.

Wu on Friday witnessed the signing of an MOU by the Taiwan Space Industry Development Association, the Slovak space company 3IPK and its partner company Decent, laying the foundation for a trilateral cooperation framework, it said.

The association was represented by chairman Wu Jong-shinn （吳宗信）, who is also the director-general of the National Space Organization, it said.

The two Slovak companies in February had visited the space organization’s headquarters at the Hsinchu Science Park （新竹科學園區） along with Slovak Economic and Cultural Office Taipei Representative Martin Podstavek.

With the office’s support, 3IPK and Decent would provide a proof of concept project in Taiwan based on a blockchain application used by the European Space Agency, the ministry said.

Decent is a start-up supplying blockchain software as a service, while 3IPK is a space blockchain company that became a member of the Slovak Security and Defense Industry Association in 2019, it added.

Hsinchu Science Park Bureau Director-General Wayne Wang （王永壯） on Friday signed an MOU with the Research Center of the University of Zilina, represented by its director Filip Pastorek, it said.

The two sides’ cooperation creates a win-win situation, as the center specializes in technical research, while the science park is strong in technical applications, the ministry said, adding that their initial cooperation would focus on experience sharing and personnel exchanges.

A Slovak delegation planned to visit Taiwan in May, but the trip has been postponed several times.

Following its visit to Slovakia, the Taiwanese delegation yesterday turned to the Czech Republic, where it plans to stay until Tuesday, next visiting Lithuania from Tuesday to Friday, the Ministry of Foreign Affairs said.