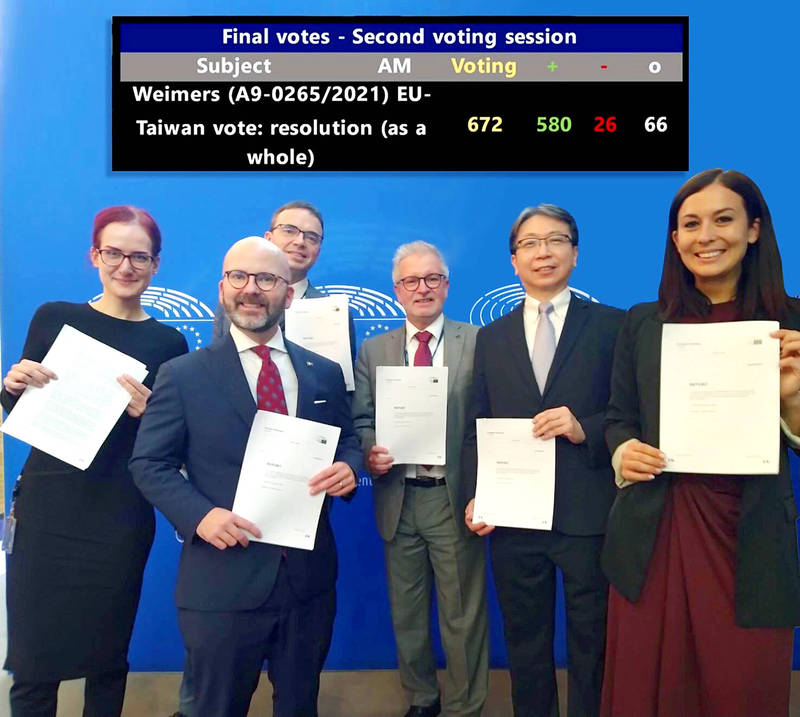 Representative to the EU and Belgium Tsai Ming-yen, second right, and members of the European Parliament hold a report on enhancing Taiwan-EU relations after it was passed on Wednesday. The report was initiated by Swedish MEP Charlie Weimers, second left. Photo courtesy of the Taipei Representative Office in the EU

DIPLOMATIC ALLY: The European Parliament report — passed 580 to 26 — said the bloc must do more to address tensions with Beijing and protect Taiwanese democracy

The European Parliament yesterday passed a report calling for closer cooperation between Taiwan and the eurozone on political, economic and cultural affairs.

Meeting in Strasbourg, France, the members of the European Parliament voted 580 to 26, with 66 abstentions, in favor of the report on EU-Taiwan political relations and cooperation.

The lawmakers hailed Taiwan as a key EU partner and democratic ally, and a contributor to the rule-based international order in the Indo-Pacific region amid intensifying geopolitical tensions, the European Parliament said in a news release.

A bilateral economic agreement between the EU and Taiwan should be designed, and the bloc must do more to address tensions with China and protect Taiwanese democracy, the statement added.

The report urged European states to bolster official ties with Taiwan, while pursuing closer relations, such as economic, scientific, cultural and personal interactions, including high-level exchanges.

The conduct of interactions is to be guided by the EU’s “one China” policy, the European Parliament said.

In the report, the European Parliament additionally voiced support for Taiwan’s bid to take part in the WHO, the International Civil Aviation Organization, Interpol and the UN’s Framework Convention on Climate Change.

“[The] parliament insists that any change to Chinese-Taiwanese relations must be neither unilateral nor against the will of Taiwanese citizens,” it said, before warning of a “direct connection between European prosperity and Asian security.”

In Taipei, Premier Su Tseng-chang （蘇貞昌） said that the resolution reflects a groundswell of popular support in Europe for Taiwan and that it marked the progress Taipei has achieved in fostering better ties with the bloc.

The nations of the world are viewing China in a different light and this is especially true for Eastern European countries, which experienced authoritarian rule and democratization as Taiwan did, he said.

These countries understand and empathize with Taiwan’s difficult position of being on the geostrategic front line against an authoritarian regime, he added.

The Ministry of Foreign Affairs issued a news release saying that it thanked the European Parliament for its support of Taiwan.

The document is of historical importance in marking a new era for Taiwan’s relationship with the bloc, it said, adding that Taiwan would continue to enhance substantive ties and endeavor to become an indispensable EU ally in the Indo-Pacific region.