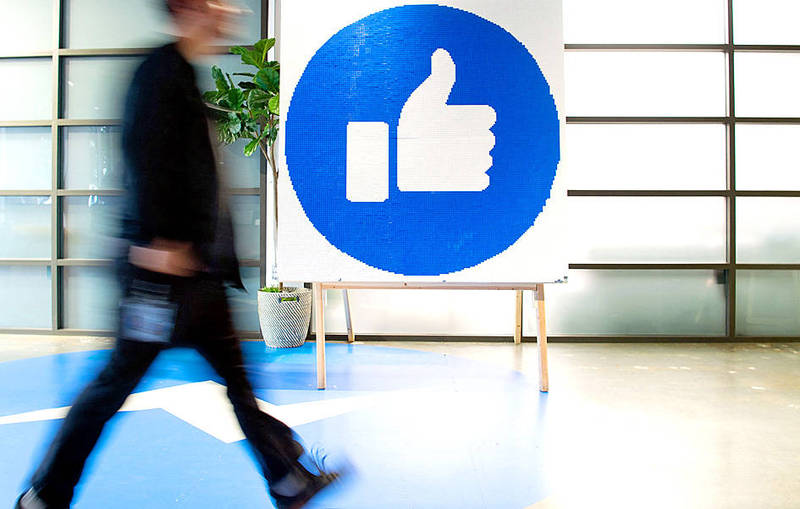 A man passes a “Like” sign at Facebook’s corporate headquarters in Menlo Park, California, on Oct. 23, 2019. Photo: AFP

Facebook Inc, under fire from regulators and lawmakers over its business practices, is planning to rebrand itself with a new name that focuses on the metaverse, The Verge reported on Tuesday.

The name change is to be announced next week, the Web site reported, citing a source with direct knowledge of the matter.

The move would likely position the flagship app as one of many products under a parent company overseeing brands, such as Instagram and WhatsApp, the report said.

Google adopted such a structure when it reorganized into a holding company called Alphabet Inc in 2015.

Facebook chief executive officer Mark Zuckerberg since July has been talking up the metaverse, a digital world where people can move between devices and communicate in a virtual environment.

The firm has invested heavily in virtual reality （VR） and augmented reality （AR）, developing hardware such as its Oculus VR headsets, and working on AR glasses and wristband technologies.

The buzz word, first coined in Neal Stephenson’s dystopian 1992 novel Snow Crash, is popular in Silicon Valley and has been referenced by other tech firms, such as Microsoft.

Children’s game Roblox describes itself as a metaverse company. Epic Games’ Fortnite is also considered to be part of the metaverse.

Zuckerberg plans to talk about the name change at the firm’s annual Connect conference on Thursday next week, but it could be unveiled sooner, The Verge said.

The move would come at a time when Facebook is under wide-ranging scrutiny from global lawmakers and regulators over its content moderation practices and harms linked to its platforms, with internal documents leaked by a whistle-blower forming the basis for a US Senate hearing last week.

Separately, Facebook has agreed to pay up to US$14.25 million to settle civil claims by the US government that the social media company discriminated against US workers and breached federal recruitment rules, US officials said on Tuesday.

The two related settlements were announced by the US departments of Justice and Labor and confirmed by Facebook.