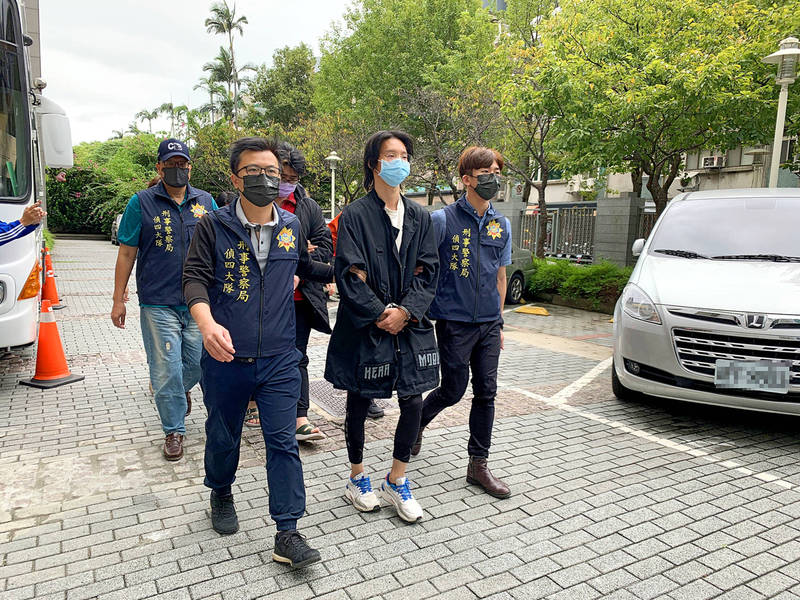 The three suspects were on Monday escorted to the New Taipei District Prosecutors’ Office for further questioning on suspicion of distributing obscene videos and publicly insulting others, in contravention of the Criminal Code.

A conviction for distributing obscene videos carries a maximum sentence of two years in prison, which can be converted or added to a NT$90,000 （US$3,222） fine, while a public insult conviction could result in a fine of up to NT$9,000.

New Taipei City Deputy Chief Prosecutor Nieh Chung （聶眾） said that while the alleged crimes were serious, it was not necessary to detain the suspects.

Yeh was released without bail, Nieh said, without elaborating.

The three are believed to have made more than NT$11 million over the past year by creating and distributing the videos, which were made by superimposing people’s faces onto existing pornographic videos using deep learning technology, the Criminal Investigation Bureau （CIB） said.

The videos make it seem as if the celebrities themselves are engaging in the sexual acts depicted. They are controversial, as the likenesses of those involved are usually used without their consent, it said.

Chu operated the social media pages and was in charge of editing the videos, Chuang looked for video materials that could be used and Yeh dealt with the finances, a CIB investigation showed.

President Tsai Ing-wen （蔡英文） voiced her concern about the issue of deepfakes, saying that her administration would evaluate existing regulations and draft relevant amendments.

Minister of Justice Tsai Ching-hsiang （蔡清祥） yesterday told legislators that the ministry has begun drafting related amendments and hoped to submit them to the legislature within a month.

Kaohsiung City Councilor Huang Jie （黃捷）, one of the people whose faces were used in the videos without their consent, said on Facebook on Monday that she had filed legal proceedings against the suspects.

She said nine other victims, all of whom are female video game streamers, had messaged her about the videos and said they would also be pressing charges.

Huang said she felt disgusted and afraid when she saw the videos herself, and indicated that the videos had caused real harm and humiliation to the victims.

Legislator Kao Chia-yu （高嘉瑜）, whose face was also used without her consent in the videos, said on Facebook that she would pursue legislation that specifically targets deepfakes, as Taiwan’s existing laws are inadequate to deal with the issue.