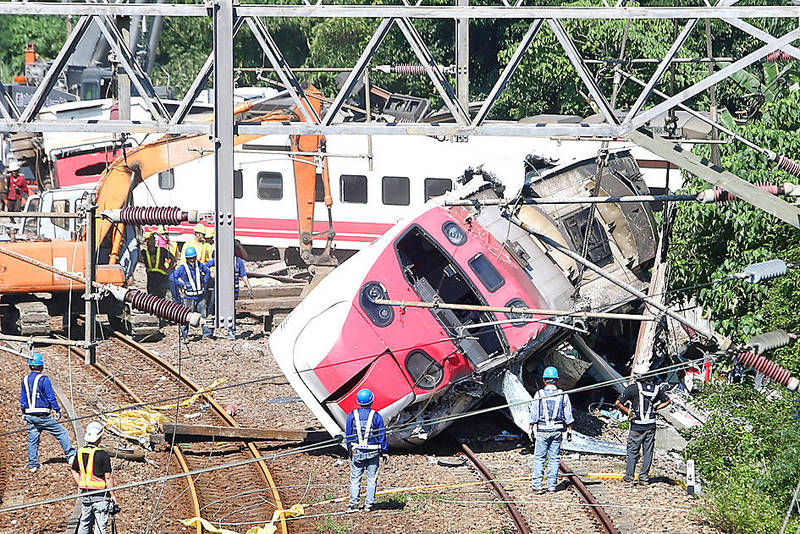 Rescuers work at the site where a Puyuma Express train derailed in Yilan County on Oct. 22, 2018. Photo: Reuters

The conductor deemed responsible for the fatal 2018 derailment of a Puyuma Express train was yesterday sentenced to four years and six months in prison for negligent homicide, while two Taiwan Railways Administration （TRA） officials were found not guilty.

The Yilan District Court determined that the cause of the crash on Oct. 21, 2018, which killed 18 people and injured 200, was the direct result of conductor Yu Chen-chung （尤振仲） turning off the automatic train protection （ATP） system after mistakenly attributing it to power failures originating from the air compression system.

Without the ATP system, which automatically slows the train when it is moving too fast, the southbound No. 6432 train entered a curve near Sinma Station （新馬） in Yilan County’s Suao Township （蘇澳） at nearly twice the permissible speed, causing it to derail, the court found.

According to the ruling, Yu at 3:39pm notified dispatch of an abnormality with the train’s air compression system, then at 4:17pm turned off the ATP system.

After departing from Luodong Station （羅東）, the train accelerated to 140kph while approaching a curve rated for at most 75kph, causing the derailment at 4:49pm, the court said.

Prosecutors said that the train’s management system had indicated a malfunction of its air compression system on the first and eighth carriages, but Yu failed to handle the issue.

Believing that the power disruption was caused by the ATP system, Yu shut off the system without notifying dispatch and failed to turn it back on at the next station in compliance with guidelines, they said.

The court therefore found Yu guilty of negligent homicide, sentencing him to four years and six months in prison in a ruling that can be appealed.

Yu’s defense had argued that the accident was caused by long-standing issues with the system and culture within the TRA, while the teams representing Liu and Wu maintained that no causal link could be drawn between their work and the deaths of the passengers.

Yu’s lawyer declined to respond, saying that the full content of the ruling has not yet been released.

The TRA said that it fully cooperated with the investigation and would respect the ruling.