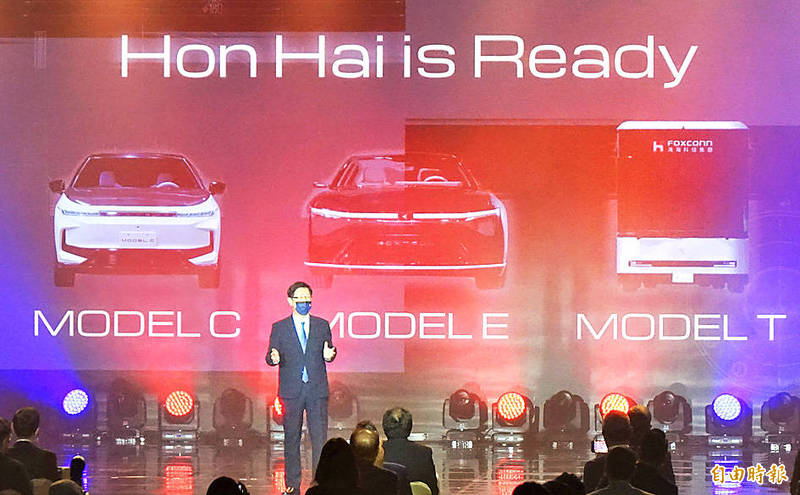 The Model C and Model E are to be initially sold under the Yulon-affiliated Luxgen Motor Co （納智捷汽車） and China Motor Corp （中華汽車） brands when they hit the market, Hon Hai chairman Young Liu （劉揚偉） said.

The company expects the electric vehicle business to contribute to revenue as early as next year, Liu said.

“We anticipate significant revenue contribution by 2023, and for EVs to be Hon Hai’s next trillion NT business in five years,” he said.

Although Hon Hai has aggressively trumpeted its EV ambitions since October last year and announced many partnerships, including with US firm Fisker Inc, Lordstown Motors Corp and European auto giant Stellantis NV, yesterday was the first time it showed the fruits of its labor.

The 4.64m-long Model C features a sleek, spacious and power-saving design, while the Model T bus is equipped with a rigid body and a 400 watt-hours battery, fully meeting the standards set by the US Federal Transit Administration, the company said.

The Model E luxury sedan, jointly developed with Italian design firm Pininfarina SpA, can accelerate from 0 to 100kph in 2.8 seconds, and generates 750 horsepower, with a full range of 750km, it said.

The three vehicles were built on Hon Hai’s EV open platform known as MIH. The “MIH alliance” is an open standard founded by Hon Hai with the aim of allowing Taiwanese EV component makers to cooperate with each other with the ambition to become “the Android of EVs.” It was spun off as an independent entity in July.

The price of the Model C would be “under NT$1 million [US$35,695],” Liu said, but did not disclose the prices for the other two models.

The prototypes are demonstration models for customers, who can have them customized according to their specifications and design, he said.

Yulon Motor chairperson Lilian Chen （嚴陳莉蓮）, who appeared on stage in a Model C, said the three EVs were built in just one year, a display of Taiwan’s potential and strengths in automobile research and development.

While the physical vehicles were the star of the show yesterday, Liu said that Hon Hai is driving its EV business into “a software-defined enterprise.”

“As the electric vehicle business develops and matures, Hon Hai will set up a software R&D [research and development] center with more than 2,500 engineers within three years,” he said. “We welcome those who are interested in the field of electric vehicle software.”

Vice Premier Shen Jong-chin （沈榮津） said the Model T is likely to start service in Kaohsiung next year, once it passes the quality and safety test of the Ministry of Transportation and Communications, paving the way for it to break into overseas markets

Former Hon Hai chairman and company founder Terry Gou （郭台銘）, who drove a Model E sedan onto the stage, said the EVs were the “best birthday present ever.”

“This is the best gift I have ever received for my birthday,” he said.