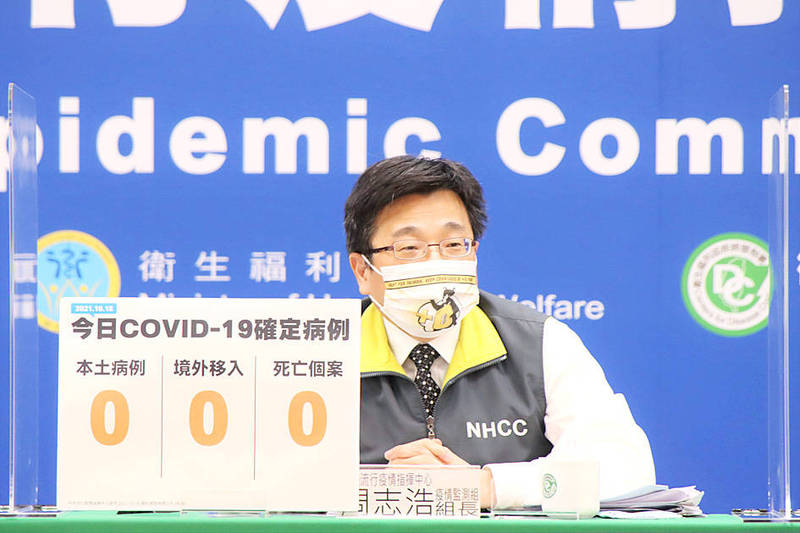 MIX AND MATCH: Mixing vaccine brands might be available next month, the minister of health and welfare said, depending on the supply of vaccines to the nation

Yesterday was the first time in 193 days that all daily COVID-19 case numbers returned to zero, with the Central Epidemic Command Center （CECC） reporting no new infections or deaths.

“This is the first time since April 8, which was 193 days ago, that we reported zero ... locally transmitted cases, imported cases and deaths,” said Centers for Disease Control （CDC） Director-General Chou Jih-haw （周志浩）, who also heads the CECC’s disease surveillance division. “Of course, we are glad to see the numbers return to zero, but we need to work hard to keep up the good work.”

Chou said that a total of 356,483 COVID-19 vaccine doses were administered on Sunday and yesterday, bringing the nation’s first-dose vaccination rate to 62.4 percent, with 84.61 doses administered per 100 people.

Separately at the Legislative Yuan in Taipei yesterday morning, a reporter asked Minister of Health and Welfare Chen Shih-chung （陳時中）, who heads the CECC, whether Taiwan was close to lowering the COVID-19 alert to level 1.

Asked if it could be lowered to level 1 by next month, Chou said at the news briefing that it could be lowered by then, but that the CECC was still discussing comprehensive criteria for adjusting the alert level and would make a public announcement as soon as a final decision is made.

Asked about a physician’s remark that border control measures would most likely be eased after May next year, Chou said: “Reopening the national borders is a very big decision, and it would depend on the global COVID-19 situation and Taiwan’s preparedness for it.”

Reopening borders is a frequently discussed issue, and changes in the government’s policy would be announced when a final decision is made, he said.

Chen urged people to get vaccinated as early as possible, adding that mixing vaccine brands might be possible next month, depending on supply.

Asked to confirm whether mixing COVID-19 vaccines would be an option for the public from next month, Chou said that the decision would be made according to the supply of vaccines in Taiwan and specialists’ recommendations.

As of 1pm yesterday, more than 860,000 people, or 63.6 percent, had booked an appointment for their first dose of the Pfizer-BioNTech vaccine in the first phase of the 12th round of vaccinations, which opened at 10am yesterday, he said.

Taipei Deputy Mayor Tsai Ping-kun （蔡炳坤） said that the city can administer up to 200,000 doses of vaccines per week, but asking for 600,000 doses to be administered in two weeks for the 12th round of vaccinations was overwhelming to the city’s healthcare capacity.

That meant an extra batch of more than 45,000 people could book appointments for the Pfizer-BioNTech vaccine yesterday afternoon, Chuang said. 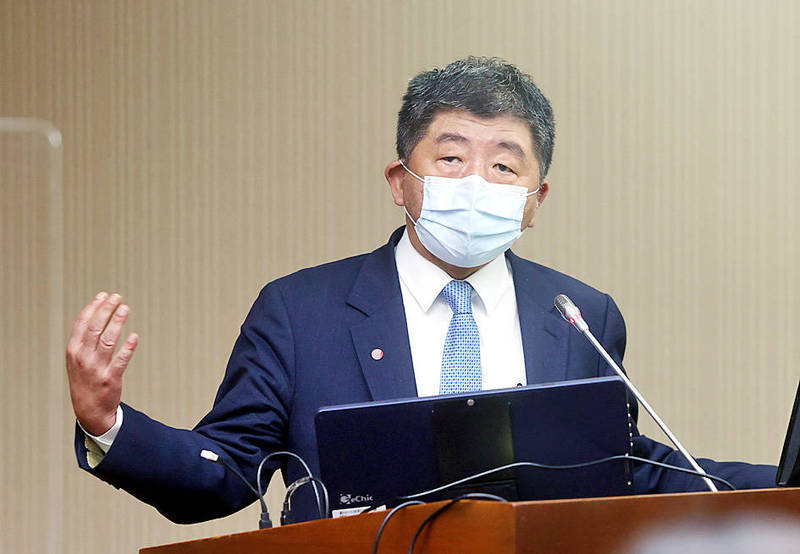 Minister of Health and Welfare Chen Shih-chung answers questions from lawmakers at a meeting of the legislature’s Social Welfare and Environmental Hygiene Committee in Taipei yesterday. Photo: CNA